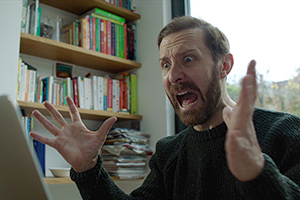 Tim Downie chats about the sitcom Hapless coming to My5.

Tim Downie on playing an argumentative journalist in comedy Hapless.

A new British sitcom, The Jewish Enquirer, has today launched on Amazon Prime Video, with an all-star comedy cast.

The final episode is surprisingly, beautifully and wonderfully poignant.

Farcically funny, but with a bittersweet twist.

Tweets from British comics reacting to England's win against Colombia.

Upstart Crow will return to screens for a third series, the BBC has announced.

While I am Will-ing Upstart Crow to have more jokes, it is still an enjoyable watch and worth tuning in for again. "All's well that ends well"