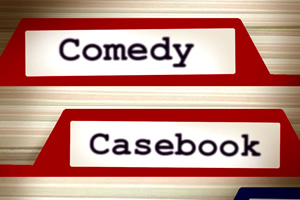 An interview in which Stewart Wright talks about his background in comedy, and the current projects he is working on.

I Want My Wife Back review:

I Want My Wife Back will need to do better

In the end, though, this was a comedy that was mainly stuck in neutral. It would really need to shift up a gear or three to make me want to watch a second series.

Earls Of The Court review:

At first blush, Earls of the Court (Wednesdays, Radio 4, 11pm) was a bizarre attempt to give us Flight of the Conchords again and hope we wouldn't notice. Two Antipodean innocents - Australians in this case - at large in London, give us a break . On second listening, though, there is a lot more subtlety to Stewart Wright and Will Adamsdale's six-part series, in which they also star as Lloydie and Johnno respectively. In fact, this could be the first example of post-millennial credit crunch expatriate comedy, no small achievement.

Lloydie and Johnno came over to Britain in 1996, when life was easy and any Aussie who couldn't get a job working behind a bar just wasn't trying. But things have changed - though not for Lloydie. He's been away from Britain for years, most recently being fired from a French ski resort, where his rugged attitude towards having fun is no longer cool. Johnno, too, has lost his job, but he is still living in the house that he and Lloydie once shared with a random assortment of other expats.

Lloydie invites himself back to crash in Johnno's shared house for a night that, everyone knows, means a month. Only the other housemates don't know that. There are complaints when Lloydie tries to turn the hallway from an internet centre back into a crazy-golf course. The other housemates conspire to get Johnno and Lloydie turfed out of the house, so they go to live with Johnno's girlfriend ("We're not living with her," Johnno says. "I'm living with her. You're just crashing").

So - two old friends reunited, one of them out of touch with a changed world. It's not Flight of the Conchords, it's Whatever Happened to the Likely Lads. And none the worse for that.

There's a philosophical Welsh poet who turns out to be a postman, a white South African who's well hard, a dodgy, randy businessman who's seldom off the phone and a dreamy Rasta, and they're all telling their stories to Nat Segnit who's met them on British trains.

Or, to tell the truth, each of them is a brainchild of Segnit and the actor Stewart Wright who have put them together into a pretend feature that's quite like the real thing, only it's funnier.

So don't stop talking to strangers on trains but do listen to this for quite a few unexpected laughs.

It seems unlikely, at first blush - a writer, Nat Segnit, spent a year travelling on various train routes accosting strange men and recording their stories, then cobbled together enough of them to put together a series of unadorned and interlocking interviews. And, as it turns out, it's all make-believe. Of course it is. Nobody who travels by train and isn't either a bore or a psychopath talks to anyone else.

Reality forestalled, though, how does it work as fiction? Very well. All human life is here, in all its pathos, humour and tragedy, in the 'interviews' Segnit 'conducts' with, in this first episode of six, a passionate Welsh postie, a driven South African rower and a swimming pool attendant (possibly Jamaican, it's hard to tell) - all played by Stewart Wright.

Nat Segnit looks like an anagram but he is, in fact, a comedy writer and performer. This new series purports to be a set of interviews with strange men, recorded by Nat over the course of a year on British trains, but is, in fact, an entirely fictional set of conversations, conceived by Segnit and then developed in improvisation with actor Stewart Wright.

Like The Mighty Boosh or The League of Gentlemen, Strangers on Trains is not easily taken in or fully comprehended on first encounter. Having listened to all six parts, I am impressed - Wright turns in convincing accents and his out-there stories are perfectly counterbalanced by Segnit's grounded 'interview technique'. This opening episode features train-based encounters with a poetic postman from Wales and a lifeguard who patrols a river using his own complex grid system. It's worth sticking with - this could be a first-class comedy.