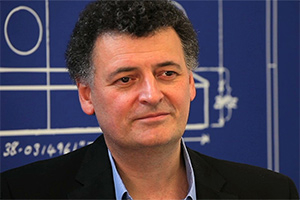 An in-depth interview with Steven Moffat. Ahead of his long-awaited return to comedy later this year with debut play The Unfriend, we chat to the Press Gang, Joking Apart and Coupling writer about sitcom success, crafting comedy, American remakes and his plans for the future.

Steven Moffat and Terry Pratchett are amongst the guests taking part in AdLib, a new improvised comedy format at the Edinburgh Fringe.

Why would you even bother with studio sitcom?

On a recent Sitcom Geeks podcast, Dave Cohen and I interviewed Pete Sinclair, who wrote Bad Move with Jack Dee for ITV having previously written Lead Balloon together. Both of those shows are single camera shows, but Pete's previous sitcoms were both studio shows (Mr Charity and All Along the Watchtower).

You may have noticed there's been lot of stuff on TV about a certain Time Lord recently (and the fuss will continue when our special Doctor Who supplement is published next week). So it's appropriate that on Norton's sofa tonight is not one but two of the actors who've played the role: David Tennant and Matt Smith. As Steven Moffat told us that the pair "got on like a couple of old women" when they filmed the anniversary special, we should be in for a real laugh. Trying to get a word in edgeways is Emma Thompson (soon to be seen in Saving Mr Banks) and Robbie Williams.

In With The Flynns article:

Writers Steven Moffat and Terry Pratchett are amongst the guests taking part in a new improvised entertainment format which will be tested out at the Edinburgh Fringe.

Counting down the days until Doctor Who-mania kicks in with the combined U.S./UK premiere of series 6 on 23 April, I'm reminded of the comedy genius side of the Steven Moffat brain in the pre-Doctor Who, pre-Sherlock days of Coupling.

Fool If You Think It's Over

Off The Telly reports on the struggle to bring Joking Apart out on DVD in this excellent article. Includes interviews with Robert Bathurst, Steven Moffat and Craig Robins, the man who organised the DVD release.

I am developing a distinct taste for Joking Apart. Steven Moffat's clever, and anguished black comedy about marriage failure. The pilot, which was shown last year, was a strange, unnerving piece of sitcom. But last night's follow up was exceptionally funny, and it's interesting to see the slight change of emphasis that have obviously been made. One to watch.

I don't want to get prematurely excited, but BBC2's Joking Apart is distinctly promising as 'a new adult comedy series'.

In other words, this is middle-class sitcom with sex and mild swear-words. Gosh! It took the trenchant Drop the Dead Donkey to show what really happened after office parties (you wake up with your face in a curry at a railway station).

Steven Moffat's Joking Apart hardly aspires to the standard of the divine DTDD, but as an analysis of modern divorce it's quite funny and acute so far. Robert Bathurst and Fiona Gillies are much too pretty and clean to be entirely true to life, but maybe separation will roughen them up.