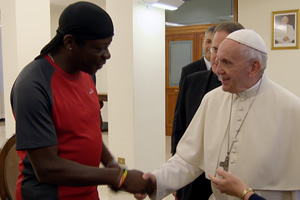 Stand-ups on their first gigs since lockdown

Bridget Christie was a bag of nerves, Suzi Ruffell played Covid for laughs and Stephen K Amos was so rusty he needed a clipboard ... top comics on the thrill of returning.

The stand-up and TV personality on the things that make him laugh the most.

Why Stephen K Amos was 'blindsided' by the Pope

"It was so surreal. I was very apprehensive because I said I would only be part of it if I could ask some questions; I didn't want to not have the opportunity to address issues."

Fringe: 25 of the all-time funniest jokes

These are some of the best jokes and one-liners we've heard at the Edinburgh Fringe over the past few years.