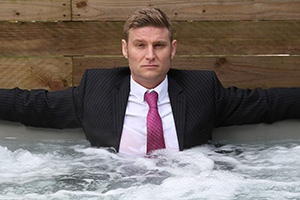 From shed shows to bright lights with Engelbert and Brydon: Scott Bennett gives us a potted history.

We asked some of the comedians performing at the Edinburgh Festival what they are looking forward to most about the 2018 festival. Some of these answers are not what you'd expect.

Scott Bennett admits he's going to drag his wife and daughter into the marketing machine for his show.

Luminaries of Lockdown: part one

We have now handed out the last of our Chortle Awards for 2021 for the Legends Of Lockdown. But what was clear from the almost 8,000 suggestions we received was the vast range of comedians and producers working to create comedy during the pandemic. More than we could possibly honour with the accolades. So today and tomorrow we highlight some of the other streaming gigs, social media feeds, podcasts and more who have done so much to provide laughs over the past 12 months.

Just the Tonic in Nottingham is to stage a live indoor show on Thursday July 30 - the day after the Frog And Bucket in Manchester puts on a comedy gig. Tickets are available for both shows. The Nottingham show will feature Ed Byrne, Daisy Earl, Scott Bennett and Quincy.

I've seen Bennett in Edinburgh and I've never understood why he has not become a bigger name. He's a totally mainstream comedian, but in a good way.