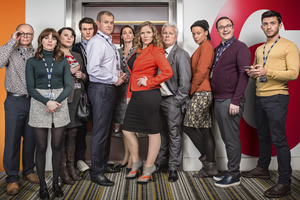 Hugh Bonneville and Sarah Parish talk about returning to the jargon-filled world of W1A for a third series. Plus we hear from Hugh Skinner and Ophelia Lovibond about how Izzy and Will are now working closer together.

Review: Inside No. 9's final episode poses a question

Inside No. 9 concludes its sixth series with an uncomfortable 'state of the nation' piece, including more political and religious themes than ever before.

It's fun, and has a fair share of shocking moments, but a strange one to end what has been a pretty strong series.

TV review: Inside No 9 - Last Night Of The Proms

Interestingly on social media some people have been saying this is the best epsiode ever, some people saying it is the worst. Which if nothing lese shows that this anthology series continues to arouse strong feelings. One thing is for certain, even a less than brilliant episode of Inside No 9 is better than most of the unimaginative tosh that passes for TV these days.

It's only the arrival of Inside No. 9's first overtly political episode that marks out how apolitical the show has been until now. Of all the uncomfortable places it's ventured, the state of the nation has stayed largely unexplored territory.

Susannah Fielding has joined the cast of The Cockfields. She will play new girlfriend of Simon in the second series of Gold's sitcom. Gregor Fisher, Michele Dotrice and Greg McHugh also join the cast.

Inside No. 9 Series 6 cast revealed

Filming has completed on Series 6 of Inside No. 9. The guest stars joining Steve Pemberton and Reece Shearsmith will include Sian Clifford, Adrian Dunbar, Paterson Joseph and Sir Derek Jacobi.

The Cockfields to return for Series 2

Gold has ordered a second series of The Cockfields, the sitcom starring Joe Wilkinson and Diane Morgan.

"Every problem is a solution waiting to happen," Hugh Bonneville says as he reprises his role as the BBC's head of values, Ian Fletcher. And right now he tells four other characters from the satirical sitcom W1A in a mock-Zoom meeting to determine the corporation's lockdown strategy. "We are looking at one of the biggest solutions any of us have ever seen."