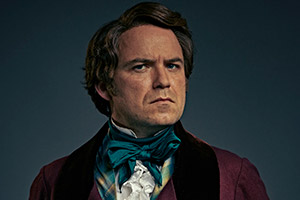 Rory Kinnear's character from the first ever episode of Charlie Brooker's dystopian drama is still in Number 10 - despite being thrown out of a zoo.

The anthology nature of Inside No. 9 allows the duo to experiment with different styles and in the opening instalment, entitled Zanzibar, they've decided to tackle Shakespearean farce. Set in the ninth floor of the titular hotel, we're introduced to a group of guests who participate in various room swaps and cases of mistaken identity throughout the half hour running time. Based on A Comedy of Errors, one of the Bard's plays that I'm unfamiliar with, the crucial part of the plot sees Rory Kinnear take on dual roles; a powerful prince and a man about to propose to his disinterested girlfriend. Throughout the piece we're also introduced to the prince's devious bodyguard (Shearsmith), an amnesiac pensioner and her camp son (Marcia Warren and Pemberton), a suicidal Scotsman (Bill Paterson), an open-minded call girl (Tanya Franks) as well as a flippant stage hypnotist (Kevin Eldon). Providing key exposition throughout the piece are the Zanzibar's bellboy (Jaygaan Ayeh) and his chambermaid girlfriend (Helen Monks) who help to participate in the confusion. I personally thought the decision to perform all of Zanzibar in iambic pentameter would get annoying quickly but instead I relaxed into the flow and ultimately felt like the decision paid off. After the initial set-up, the gags began to flow, and I found myself laughing out loud at least three times throughout the piece thanks mainly to the quick-witted nature of the dialogue and the comic timing of the ensemble cast. Praise must go to Warren for portraying a doddery old dear who takes on a thankless task and to Kinnear for convincingly playing two very different characters. Furthermore, I felt that both Eldon and Franks shone in smaller yet vital roles and Ayeh held his own against many more established comic players. Zanzibar put me in mind of prior Inside No. 9 openers Sardines and Couchette; which also took place in a confined setting and were full of big laughs rather than moments of subtlety. However, whilst both of those instalments ended with a rather dark denouement, Zanzibar contained a rare happy ending that you won't find in many Inside No. 9 episodes. Whilst I enjoyed the experimental nature of the episode and found it kept my attention, I prefer when Pemberton and Shearsmith go a little darker with their material therefore I'm looking forward to seeing what awaits me in coming weeks as the fourth series of Inside No. 9 continues.

Inside No.9 review: Deliciously creepy with star cast

With the constant swapping of rooms and the rhyming, scanning dialogue it was without doubt a very clever piece.

A triumphant return for Pemberton and Shearsmith

Is there anything to which Steve Pemberton and Reece Shearsmith can't turn their hands?

TV Review: Inside No. 9 - Zanzibar

Reece Shearsmith and Steve Pemberton's comedy anthology series is back and better than ever, with a new tale that is well worth your time - it's funny and clever, it even rhymes!

Inside No. 9 series 4 episode 1 review: Zanzibar

This comedy farce written in verse shows that custom cannot stale Inside No. 9's infinite variety.

It's a sublime and intentionally shambolic ode to William Shakespeare; delivered in Bard-like verse.