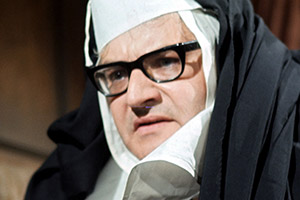 Ronnie Barker is well known for sitcom Porridge and sketch show The Two Ronnies in particular; but the former was born from a string of broadcast pilots showcasing his wide comic talent. 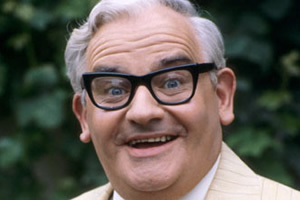 10 years since his death, we remember Ronnie Barker and his route to comedy stardom.

The re-evaluation game: Porridge - A Night In

The whole thing is shot through with melancholy in a manner which we rarely see in sitcoms these days, and while I can't say it's a series that I'm any more passionate about given its questionable elements, having rewatched this episode it's certainly given me more respect for it.

The Two Ronnies at 50

The rare double act who actually liked each other, Ronnies Barker and Corbett turned wordplay and innuendo into high art. Why did they stop?

What are the ingredients that turned the sketch show into a long-running comedy classic? To find out, we asked those who contributed to some of Corbett and Barker's most famous routines.

Coin given as change on comic's bus ride to job interview expected to raise up to £5,000.

A classic Two Ronnies sketch has been recreated by residents of a town who wanted to "shine a light" on a 280-year-old shop.

Caroline Aherne, Victoria Wood and Ronnie Corbett and have been added to a prestigious and definitive list of the greatest ever Britons.

Channel Gold has revealed the shortlist of 30 comedians who will be featured in its show Britain's Greatest Comedian.