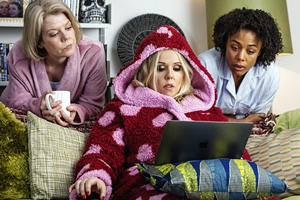 A panel discussion with the stars and director of GameFace - including creator and writer, Roisin Conaty. 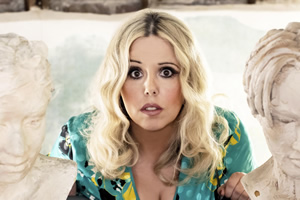 Roisin Conaty] talks about the return of her sitcom, GameFace. She admits that - despite her character taking driving lessons - she still can't drive in real life. 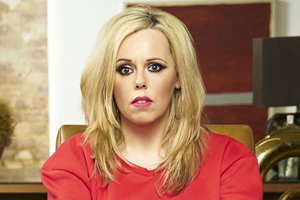 Roisin Conaty talks about bringing her sitcom to GameFace to TV, and how she had to fight her stand-up instincts to include dramatic elements in the scripts.

Roisin Conaty introduces GameFace, her Channel 4 sitcom pilot about a woman who is single, drinks too much and eats too much.

Roisin Conaty is going to be a big-name comedian one of these days...

After Life - a heavenly return or a hellish flop?

Once I had discovered After Life was returning for a second season, I felt both excited and intrigued. I thought the first season was brilliant and had potential to develop plots further, but I also wondered how Ricky Gervais could expand upon the first season's rather conclusive ending. Nevertheless, once the highly-anticipated wait was over, I involuntarily binge-watched season two, and I have to say the show has been taken to new heights.

As a comedy series with a soft emotional core, the show encapsulates the quintessentially British habit of using humour as a coping mechanism. Tony's change of heart offers fresh hope that if a grumpy old man can have a change of heart, anyone can. Fans, keep an eye out for season three!

The comedian, 41, on getting women's sitcoms on to TV, overordering in restaurants and preferring decent to shiny people.

Given he's known for brutally direct stand-up, it's little surprise that Ricky Gervais doesn't do subtext.

There is certainly a lot going on in series two. This series overview barely scratches the surface and there are some crucial details we haven't revealed. Does it surpass the first series? I'm not sure. That made such an impact it was always going to be hard to beat. But there is no doubt that this sequel will grab you from the very start and keep you grabbed until the very end.

This series is constantly looking for easy solutions - whether it's not bothering to film 'village' scenes outside of London or using swearing where good jokes ought to be.

Ricky Gervais's grief-driven comedy is just a rehash of the first series.

The most influential people in London for comedy.