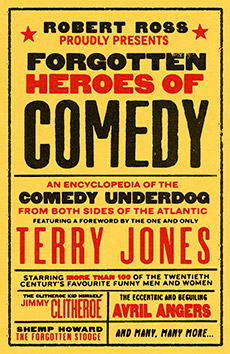 In this long overdue and affectionate salute, celebrated comedy historian Robert Ross pays tribute to some of the finest, funniest and most fascinating names in comedy - from both sides of the Atlantic.

With the passionate input of such favourite comics as Tim Brooke-Taylor, Hattie Hayridge, Roy Hudd, Michael Palin, Ross Noble, Chris Addison and Bernard Cribbins, Ross will pay long tribute to legends of humour who, for a variety of reasons, didn't quite reach the heady heights of stardom or, once they had, couldn't cope with the pressures.

Whether it be personal demons, changing trends in comedy or a rival act undermining their fame, the ups and downs of the Forgotten Heroes Of Comedy will make for fascinating reading.

Presented in alphabetical order for ease of reference and to give a scattered through the ages feel it will be illustrated throughout with a lavish collection of rare film stills and original theatre posters. The book will be the ultimate talking point in pubs and offices and living rooms across the country. "I bet he hasn't included the forgotten member of The Three Stooges. That Shemp Howard who reluctantly gave up a profitable career as Hollywood's busiest character actor to join his brother Moe in the team." Oh. Yes. Yes, he has! So whether it is a favourite from the distant smoke and ale-stained world of the music hall like the great George Robey - the man dubbed 'The Prime Minster of Mirth' decades before John Major - or the down-beat poetry of Hovis Presley, who dropped disenchanted bombs on the late 1990s, Forgotten Heroes Of Comedy will finally elevate them to the Hall of Fame where they belong. Forgotten, no longer.

With an introductory piece by that very much remembered and influential comedy hero, Monty Python pioneer Terry Jones, this book will enthral and enlighten the most die-hard of comedy admirers.