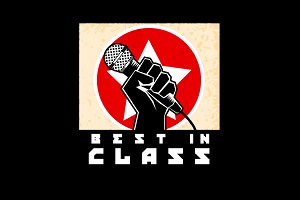 Best In Class, sharing a wealth of recommendations

The stars of the Edinburgh Fringe working class showcase show Best In Class each recommend another comedian to see at the Fringe.

Out of all the people that try to make it as a professional comedian, the number that actually achieves that goal is relatively... well, tiny.

What one thing would you change about the Fringe?

It's a hot-button issue at last: the establishment thinks that comedy is worthless. Leo Kearse (Tory capitalist) and Rob Mulholland (socialist working-class agitator) have joined forces to ask why public money is only ever spent on entertainment few of us want.

Now it's Edinburgh Fringe comedians turn to dole out their opinions.

What's the worst room to perform in at the Fringe?

Edinburgh's biggest dives, by the comedinans who play them.

The worst place comics have stayed during the Fringe?

The one thing Fringe performers wish they knew first