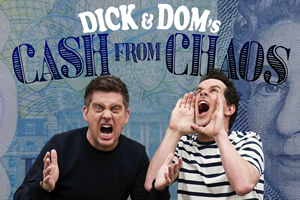 Dick & Dom explain their new live show and podcast... a format which puts their entire takings from the project at risk!

Only two episodes in and we are already seeing some early riders and trailers.

The annual festival is back with comedy, music and cabaret acts for all.

Dick and Dom chat to EdFestMag.com

As two of the biggest names at this year's festival, Dick and Dom have upscaled from the comfort of their bungalow to the massive McEwan Hall to bring their high tempo show to the Fringe for the first time.

What makes a great double act?

What is the appeal of the double act?

50 brilliant shows to see at the 2018 Edinburgh Fringe

This summer, the Scottish capital is hosting everything from Jane Austen-inspired improv and Ethiopian circus to Beckett and Bernstein. Here is our critics' pick of what to see.

10 of the most unusual shows to see at the Fringe

From rapping care workers to synchronised swimming on dry land, these shows are her guide to the strange and surprising treats on offer at the Fringe.

After Trevor & Simon and Ant & Dec, Dick & Dom were the next cheeky-chappie kids' TV double act, and they're on their away to their Edinburgh debut.