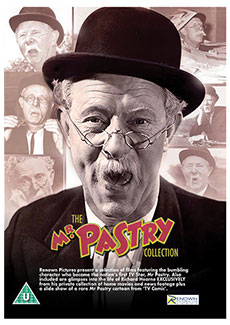 Renown Pictures present a selection of films featuring the bumbling character who became one of the nation's first TV stars, Mr Pastry. Also included are exclusive glimpses into the life of Richard Hearne from his collection of home movies plus a slide show of a very rare Mr Pastry cartoon from TV Comic.

Tons Of Trouble (1956) - 74 minutes
A comedy, directed by Leslie S. Hiscott, starring Richard Hearne & William Hartnell. Mr Pastry deeply cares for the temperamental apartment boilers he maintains and names them "Mavis" and "Ethel". Trouble begins when he faces the sack.

The Butler's Dilemma (1943) - 73 minutes
In this comedy directed by Leslie S. Hiscott, Richard Hearne stars as a gambler who agrees to act as a butler for a gambling party in order to pay off his debt.

The Time Of His Life (1955) - 71 minutes
This comedy film stars Richard Hearne as a newly released prisoner who returns home to the embarrassment of his socially ambitious daughter.

Madame Louise (1951) - 79 minutes
A comedy film directed by Maclean Rogers. The owner of a dress shop gambles the business away to her bookie, who inherits not only the shop but also the manager. Starring Richard Hearne and Petula Clark.

Something In The City (1950) - 76 minutes
A comedy film directed by Maclean Rogers. Starring Richard Hearne, Garry Marsh and Ellen Pollock. The wonderfully simple story of Mr Ningle, who lost his job in the City many years ago yet still commutes every day - to a very different job!

Mr Pastry Cartoon Strip
This rare piece of comic memorabilia features Mr Pastry and was first published in TV Comic, a British magazine produced weekly from 1951-1984. The comic featured strip cartoons with stories about the TV favourites of the day, including Muffin the Mule and Larry the Lamb as well as Mr Pastry. Printed in full colour, the cartoon is entitled "Mr Pastry's Sportsday by Richard Hearne" with the words: "TV Mini-Book No. 4" and a price of 6D. The illustrations are by TV Comic regular Lunt Roberts, a contributor to Punch and the Daily Mail, best known for his illustrations of Richmal Compton's Just William books.

The cartoon tells of the day Mr Pastry and his friends Mr Timblethwaite and Mortimer decided to do something to "help British sport". Mr Pastry has invented a machine called 'The Pastry Self Starter' which he persuades Mr Timblethwaite to try, but unfortunately he is catapulted through the air and gets stuck on top of a church spire.

Next Mr Pastry ties a rope to an old kettle for throwing the hammer, but he ends up with the rope wrapped tightly around his throat! Mr Timblethwaite wraps the rope around all three of them. Mortimer then tries, and sends the kettle into the air, knocking an unsuspecting PC Catchem to the floor. Mr Pastry and his friends now run a race - with the policeman in pursuit! They run into Farmer Hayseed's field where prize bull Billy gives chase. Now PC Catchem is running away too and they all leap a high hedge together, landing in a river, swiftly followed by the bull! Finally, the bull is led back to his field, and the three receive a telling off from the law!

Celebrity Crazy Cricket - 10 minutes
Short film of a 1950s celebrity cricket match played by stars of the day. Richard Hearne makes a guest appearance as Mr Pastry and entertains the crowd with various jokes and routines including his own version of a 'sticky wicket'!

Richard Hearne & Buster Keaton: 'Clowning Around' - 2 minutes
Rare footage of Buster Keaton & Richard Hearne larking around in America in the 1950s / 1960s. Hearne first made a guest appearance on The Ed Sullivan Show in 1954, subsequently appearing on the show frequently. He was a favourite of comedy superstar Buster Keaton.

Petula Clark - The Day Begins Early - 3 minutes
A rare behind the scenes look at Petula Clark's working day in 1948, from a lost news piece.

Mr Pastry In Bexhill (1960) - 2 minutes
Rare footage of Richard Hearne from his private home movie collection, in which he clowns around at a charity home for disabled children in Bexhill. This cause was very close to his heart and he dedicated a huge amount of his time to raising money for the charity he so dearly believed in, despite commitments worldwide.

Mr Pastry Performing With Chipperfield's Circus - 9 minutes
Exclusively brought to you from Richard Hearne's private collection of home movies. He started performing in the circus at the age of 7, following his father's footsteps, who was a circus clown. Hearne also performed with the world famous Chipperfield's Circus as a clown and acrobat. After he became an international star, he still enjoyed returning to his performance roots as a behind-the-scenes visitor to Chipperfield's. In this short film he performs comic stunts as only he did best, as Mr Pastry in this incredible footage from the late 1950s, including shots of his beloved car and him clowning around and doing stunts with a horse.