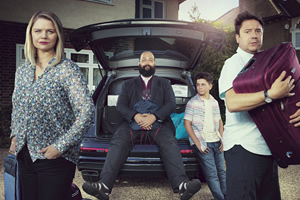 Rufus Jones introduces his sitcom Home, and we hear from actors Rebekah Staton and Youssef Kerkour. Plus, Syrian refugee adviser Hassan Akkad talks about how he got involved in the comedy.

Don't be put off by the premise - Rufus Jones's comedy is a delight.

Series is high on drama and lacking in laughs for Syrian refugee Sami.

The comedy about Syrian asylum seeker Sami returns, eight months on from his arrival in the UK. Sami (Youssef Kerkour) is still waiting for his right to remain and in the meantime is getting impatient with his hosts Katy (Rebekah Staton) and Peter (Rufus Jones). An earnest if heavy-handed opener.

Channel 4 orders another series of Home

Home, the sitcom by Rufus Jones about a Syrian immigrant living with a family in Dorking, is to return to Channel 4 for a second series.

For obvious reasons, there was a sense of ethical tenterhooks when it came to watching Home, a new comedy written by and starring the talented Rufus Jones (W1A; Camping), about a Syrian refugee who ends up living with an English family after stowing away in their car's boot. Prissy Peter (Jones), Katy (Rebekah Staton) and her son (Oaklee Pendergast) discovered Damascus teacher Sami (Youssef Kerkour), who had been separated from his wife and child. Sami's predicament divided the already struggling couple, with Katy sympathetic, and Peter less so. "He's lost and alone and he needs looking after." "He's not Paddington." Peter ended up sleeping on the sofa opposite Sami, with the latter drily remarking: "We've both been exiled by an unstoppable force."

Admittedly, Home wasn't trying to be a documentary, but it was rather too light on the suffering of real-life refugees. However, it was also witty and poignant. Kerkour's Sami had the best moment - a sight gag about Marmite not tasting so good (I know, outrageous - I'll be writing a letter of complaint to Channel 4). It was important that Sami didn't become a human prop for the British family to riff about, but, if anything, he emerged as the most fully formed character - wry, fast-witted, dignified. This came through stronger towards the end, when Sami invited Peter to ask him questions. "Which side of the road do you drive?" "The one without the tanker." "Is there anything I can do to make you feel more at home?" "There actually is: tear down those walls and blow up the toilet." At such points, Home seemed part refugee-themed comedy, part updated Odd Couple. Going by this opener, it should be worth keeping an eye on.

This fish-out-of-water comedy about a family who take in an asylum seeker feels timely but mild-mannered to a fault. Where's the conviction?

A family find a Syrian man hiding in their boot in Rufus Jones's comedy. It's a warm-hearted riposte to years of 'terrifying' anti-immigrant rhetoric, he says.

Home is the perfect mix of funny and tragic

What happens when you open the boot of the family car to find an unexpected passenger all the way from Syria?