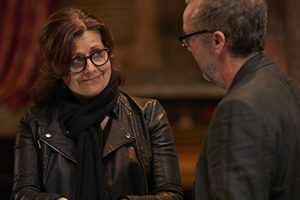 As Love In Recovery returns to Radio 4 for a third series, we chat to Rebecca Front to find out more.

Rebecca Front talks to British Comedy Guide about being part of new show Jo Brand's Great Wall Of Comedy, and her other panel show and acting work.

An interview with Rebecca Front, who is currently starring in Sky Living's new sitcom, The Spa.

"I'd love to do Shakespeare - or be the next Bond!"

'We are all on the spectrum of obsession and anxiety'

It has not yet been revealed who will be appearing in the sketch at the Royal Albert Hall, but the latest line-up for the major event has just been confirmed.

The nominees have been revealed for the 2019 Chortle Awards. Kiri Pritchard-McLean leads the lists, with four nominations.

The Other One news:

The Other One bigamy comedy returns

Bigamy sitcom The Other One - about two very different mother-and-daughter pairs brought together when their one, single husband/father dies - has been commissioned for a full series on BBC Two.