Philip Simon is an award-winning stand up comedian, comedy writer & actor. Before lockdown, he was gigging professionally throughout the UK, as well as such far-flung places as New York, Scandinavia, Europe, the Middle East and New Zealand. He has also previously entertained holiday goers as part of the line up of acts for the Sensatori holiday resorts.

During Lockdown he launched his own online kids' comedy club called School's Out Comedy Club, which has just been nominated for "BEST KIDS' SHOW" at the Leicester Comedy Festival. All episodes can be found on YouTube (bit.ly/SchoolsOutComedy), and the children's joke book is available to buy from his website (www.philipsimon.co.uk/shop).

He also launched and co-hosts a new comedy chat show podcast called Jew Talkin' To Me? with fellow Jewish comedian Rachel Creeger.
​
Philip is also a regular part of the production team on BBC TV's Mock the Week, Taskmaster for Dave and ITV's The Imitation Game. This sees him very comfortable in studio settings, making him ideal for shows of this nature, both as a writer and panelist.

"With Philip Simon as compere comedy is guaranteed"Jewish Chronicle, 2018 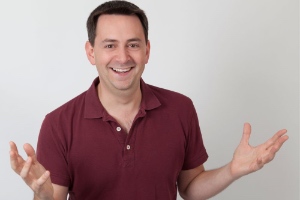 Non-comedy TV and film credits might be found here:
Philip Simon on IMDb