Peter Kay - The Sound Of Laughter

Peter Kay's unerring gift for observing the absurdities and eccentricities of family life has earned himself a widespread, everyman appeal. These vivid observations coupled with a kind of nostalgia that never fails to grab his audience's shared understanding, have earned him comparisons with Alan Bennett and Ronnie Barker.

In his award winning TV series' he creates worlds populated by degenerate, bitter, useless, endearing and always recognisable characters which have attracted a huge and loyal following. In many ways he's an old fashioned kind of comedian and the scope and enormity of his fanbase reflects this. He doesn't tell jokes about politics or sex, but rather rejoices in the far funnier areas of life: elderly relatives and answering machines, dads dancing badly at weddings, garlic bread and cheesecake, your mum's HRT...

His autobiography is full of this kind of humour and nostalgia, beginning with Kay's first ever driving lesson, taking him back through his Bolton childhood, the numerous jobs he held after school and leading up until the time he passed his driving test and found fame.

The audiobook release includes two all-new bonus chapters not included in the print versions of the book.
Get this audiobook for nothing by signing up for a free trial of Amazon's Audible 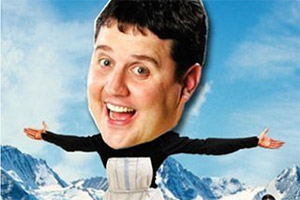 Peter Kay has recorded an audiobook of his bestselling first autobiography, The Sound Of Laughter, for the very first time. Including two new chapters, it will be published later this month. The comic has also revealed he has begun work on a third volume, charting his TV career.