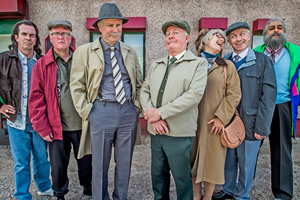 The cast of Still Game talk about how the sitcom is maturing, and what it was like to work with guest star Craig Ferguson.

Outrageous doesn't begin to describe it.

Why Still Game will be sorely missed

Scotland's best-loved sitcom has bowed out. Here's how its hilarious blend of Glasgow banter and bunnets captured a nation.

The stars of Still Game have announced one final live stage show, to play at Glasgow's SSE Hydro arena, in Autumn 2019.

The BBC has ordered Series 8 of Still Game. The creators say: "We can't wait to get started on the next batch of adventures with Jack and Victor. We have lots of surprises in store for you!"

Showbiz is full of people going on journeys, most of them tedious. Not this one. Book your passage.

Still Game: Live 2: What you need to know

The gang from Craiglang are heading back on the stage, with the live run kicking off today, and we take a look at what you can expect.

iN10 was given special behind-the-scenes access to meet the Still Game cast. Here, they share their magic memories...

Still Game to return to TV

Hit Scottish sitcom Still Game is to return to TV for a new series. Creators Ford Kiernan and Greg Hemphill are working on six new episodes for BBC One.