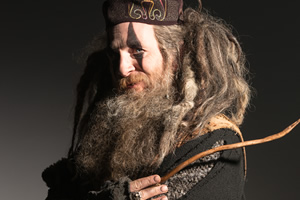 Paul Kaye, who plays deranged wizard Howell in Zapped, talks to us A&E trips, hot sets and what to expect from Series 3. 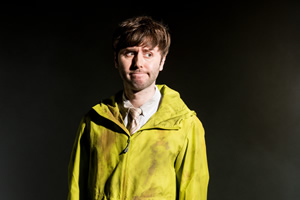 We talk to stars James Buckley and Paul Kaye, with producer Kerry Waddell on hand, on the set of Zapped Series 2.

Ricky Gervais is, take your pick, ever reinventive (a la Madonna, Lady Gaga, the royals) or ever mutating (the worst kind of spirally viruses, the royals). A year ago, in Tony Johnson, subject of his latest drama, After Life, he combined aspects of past characters: The Office's gloriously unself-aware Brent; the more savvy Andy Millman in Extras; the saccharine platitudes that sat so ill in Derek alongside gags about mental health or other disabilities. After Life was a surprising runaway hit on Netflix, for an arguably slight comedy about a very singular, small-town man's depression after the loss of his wife, and how an angry man learned to be kind again.

I happen to like Gervais. Many don't. I relish his takes on some complex aspects of life - freedom of speech, organised religion, disorganised religion of the variety that tends to revere big lumps of rock or small ones of crystal, people who describe themselves as "people people". I like his loyalty to actors, although with such talents as Kerry Godliman and Ashley Jensen around it's surely not hard. And Gervais, bless, has done it again - same local paper, staffed by the soft of brain and low of self-esteem, same gallery of township grotesques, same lonely flat occupied by lovely dog Brandy and many long nights of the soul, pills to hand and large glass of red and videos of his late Lisa.

And I think I see what he's trying to do with the formula. To show how every single one of life's travails, when it angers one inordinately, can be surmounted, no matter one's grief, by a half-sigh of tolerance, of kindness - as long as the sugar is intercut with Gervais showing how mean he, and life, can be.

Part of the problem with this six-part second series is the scatological glee with which he hugs these acid segments. So it's not enough to have a cartoonishly unempathetic therapist; Paul Kaye has to make Chris Finch (The Office's rampant misogynist) look achingly woke. Not enough to have am-dram spoiled by a fat kid farting - he has to soil himself on stage. And, no matter that the arc of this second series is ultimately rewarding, hugely if quietly aided by the likes of Penelope Wilton and Diana Morgan - I'm just not sure whether this second journey is worth the lack of laughs it takes to get there. Because it is, indeed, just less funny. And if the message is the only thing, never mind the laughs crude or otherwise, I'm not sure whether it's worth the saying.

Given he's known for brutally direct stand-up, it's little surprise that Ricky Gervais doesn't do subtext.

There is certainly a lot going on in series two. This series overview barely scratches the surface and there are some crucial details we haven't revealed. Does it surpass the first series? I'm not sure. That made such an impact it was always going to be hard to beat. But there is no doubt that this sequel will grab you from the very start and keep you grabbed until the very end.

Anna And The Apocalypse review:

Anna and the Apocalypse review

John McPhail's Christmas zombie musical comedy was warmly received on its festival debut and has picked up a solid following through its theatrical and DVD releases over the last couple of years.

Year Of The Rabbit news:

Kevin Cecil and Andy Riley - the writers of Year Of The Rabbit - say they have "sketched out" some ideas for Series 2, although it has yet to be commissioned.

Review: Channel 4's Year of the Rabbit is silly & smart

Essentially The Sweeney in Victorian times (in fact the show's original working title was Ye Sweeney), Year of the Rabbit proves to be a winning mix of smart but silly gags with a first-rate cast.

Year of the Rabbit review

Matt Berry in superb form as drunken and incompetent copper .

Year Of The Rabbit preview: