The comedian is best known for his partnership with Syd Little, attracting huge success and television audiences of almost 20 million viewers through the 1970s and 80s.

He was born Edward McGinnis in Glasgow, on 25th June 1941, and had been in hospital near his Portishead home with heart failure before contracting covid-19 (coronavirus).

His son, Ryan, posted on Facebook: "It is with great sadness that Mum and I need to announce that my dad passed away in the early hours of this morning.

"He had been suffering with heart failure and unfortunately, whilst in hospital, contracted the coronavirus, which his heart was sadly not strong enough to fight. Dad had fought bravely for so long. Due to this horrible disease we had been unable to visit him at the hospital but all of the family and close friends spoke to him every day.

"We will miss him terribly and we are so proud of everything he achieved in his career with Syd and know that he was much loved by the millions that watched them each week."

Although he was born in Glasgow, the McGinnis family moved to Manchester when Eddie was 9 years-old, where he became a huge fan of Manchester City football club, whose stadium was opposite the family home. It was in the suburb of Wythenshawe in 1963 where he first met Syd Little, quickly forming a comedy double-act. 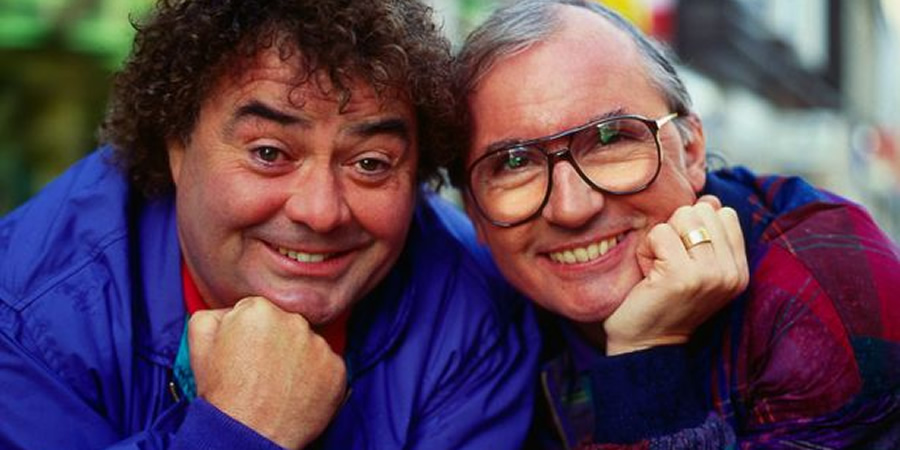 Little and Large shot to fame on talent show Opportunity Knocks, which they won in 1971. Their popularity grew over the decade, before the 1978 launch of BBC One's The Little And Large Show.

Mixing stand-up and sketch segments much in the same vein as The Two Ronnies and The Morecambe & Wise Show, the comedy was a huge hit, regularly attracting audiences of around 18 million viewers a week, across its 11 series run, and concluding in 1991.

The duo also became popular pantomime stars, and despite reports of a falling out, remained good friends.

Eddie had suffered from kidney and heart problems for a number of years, and had a heart transplant in 2003. In a 2017 interview he talked about how he had to tell his double-act partner how his hospital trip meant the end of their double-act.

He said: "That phone call to Syd was the most painful I've ever had to make. I was crying my eyes out because I knew I was putting him out of work. He had bills to pay. I felt horrible. We weren't just a double act. We were mates, right from the start."

Talking about trying to perform whilst having health problems, he said: "When I put my seatbelt on in the car, I had to sit for a minute to get my breath back. It was a nightmare. Syd was living it with me every minute of every day. When we did panto in Wimbledon he spent every day going to pharmacists, buying stuff to help me breathe."

He also became a campaigner for legislation to make organ donation a presumption, rather than opt-in. After himself receiving a transplant, he explained: "It feels like I'm insulting the donor's family if I don't look after myself. They gave me an incredible gift. I don't want to let them down."

Showcasing his self-deprecating wit, he once joked in relation to his health problems: "It was the day Spike Milligan died. My kids were driving down from Manchester. When they turned on the radio, the first thing they heard was 'comedy legend dies'. I told them, as soon as they heard the word 'legend' they should have known it wasn't me."

Eddie had recently been working primarily on the after-dinner circuit, and had appeared in numerous TV guest acting roles.

His autobiography, Larger Than Life, was published in 2005, and he is survived by his second wife, Patsy (married 1983), and three children, Samantha, Alison and Ryan.

Eddie Large and Syd Little dominated television screens across the nation for fifteen years; drawing in record viewing figures of more than 16 million at their peak. They are fondly remembered as two Britain's finest comedians, taking the winning double act formula and making it their own.

For the first time Eddie Large tells his own amazing story of their antics and their sometimes turbulent yet continuing life-long friendship.

Larger Than Life is his own account of his rise to fame, from his earliest days with Syd and their young dreams of rock 'n' roll stardom through to the realisation of their popularity. Still one of the country's most respected comics, Eddie Large speaks openly and honestly about his hard upbringing, opening up in this uplifting and humorous autobiography of a larger than life man with a larger than life personality.