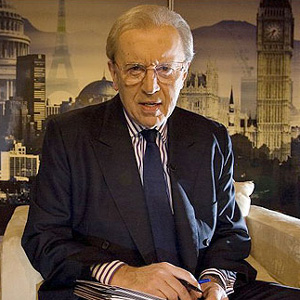 Sir David Frost has died at the age of 74, after a suspected heart attack.

Frost was behind some of the greatest successes of the 1960s' satire boom, including the landmark comedy series The Frost Report and That Was The Week That Was, before becoming better known for hard-hitting political journalism.

He rose to international fame in the 1970s after conducting a series of interviews with Richard Nixon, the disgraced former US President.

Frost's career in comedy began at Cambridge University, where he was secretary of the famous Footlights society at a time when fellow members included Peter Cook and John Bird. In 1962, the BBC producer Ned Sherrin cast him as the presenter of a new topical format, That Was The Week That Was.

A live, satirical, weekly series, 'TW3' became incredibly popular and influential. Coinciding by luck with the scandalous Profumo affair, the series mixed sketches, stand-up and music, playing a key role in opening the eyes of viewers to the fact that public figures, particularly politicians, do not necessarily lead the blameless, reputable or respectable lives they often promote.

After TW3 ended, many of the same team reunited to produce Not So Much A Programme More A Way Of Life, a similar format but broadcasting three times a week - on Friday, Saturday and Sunday nights - between November 1964 and April 1965.

With his catchphrase "hello, good evening and welcome", in 1966, Frost formed his own production company, David Paradine Productions, to launch a new series, The Frost Report, which he anchored. Again mixing stand-up elements, sketches and music, the satirical series examined a different topic in each show. Its cast was headed by John Cleese, with Frost recruiting and placing together for the first time on screen Ronnie Barker and Ronnie Corbett.

Recently, Frost fronted a number of BBC Four documentaries: Frost On Satire and Frost On Sketch Shows, plus a one-off celebratory reunion programme, The Frost Report Is Back!, in 2008.

He was also the co-creator, original presenter and co-rights-holder to popular entertainment format Through The Keyhole, which returned to screens for the first time in five years just last night, now hosted by comedy character Keith Lemon.

Sir David Frost died from a suspected heart attack some time around 8:30pm yesterday, before he was due to deliver a speech aboard cruise ship the MS Queen Elizabeth.

He received several honours during his lifetime, including an OBE in 1970, a knighthood in 1993, a BAFTA fellowship in 2005, and a lifetime Emmy in 2009. He is survived by his widow, Lady Carina Fitzalan-Howard, and their three sons.

BBC Director General Tony Hall says: "You couldn't write the history of broadcasting today without realising the huge influence David had on it. From satire to comedy to the big political interviews, for more than 50 years he brought us the history of the world we live in today, that's the mark of the man. I had lunch with him just three weeks ago to discuss a new series on his work. As a broadcaster and as a friend he was always warm, enthusiastic and brilliant. David was one of the BBC greats and he will be hugely missed."

Here is an edition of TW3:

Here is a particularly famous segment of The Frost Report on news:

This video includes the show's most famous sketch; Cleese, Barker and Corbett on the topic of class: