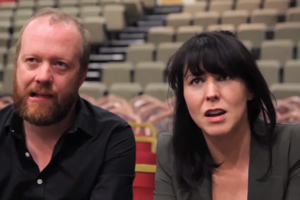 Here's three videos in which writers and producers talk about the art of making a British comedy feature film.

Lee Mack's sitcom Semi-Detached has been cancelled by the BBC, while the comic has started making an ITV football documentary.

Neil Fitzmaurice on why the pandemic is a goldmine for new material.

Lee Mack as a wedding DJ having a midlife crisis? It sounds naff, but it's like Birdman - if Birdman were set in a cream sitting room.

Promising concept and cast let down by shortage of laughs.

In some respects, this BBC sitcom channels elements of the sadcom - but the moments aren't frequent or long enough to actually make us care.

The gimmick of Lee Mack's new sitcom is that all the action happens in real time - though whether audiences would appreciate, or even notice, the restriction that writers David Crow and Oliver Maltman have imposed on themselves remains to be seen.

It's interesting that this is on BBC Two because it's really only a whisker away from being a mainstream BBC One sitcom.