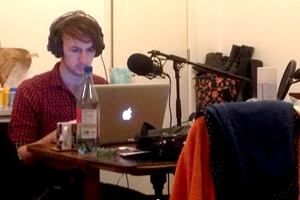 A collection of top tips related to the Edinburgh Fringe from contributors to the Ask The Industry podcast.

Any party on TV is the signal for insult, indigestion and vomiting off.

Mum had no laughter track, but that wasn't the singular difference about this remarkable comedy [compared to Upstart Crow]. The fact that the glorious Lesley Manville hasn't played more comedy was the thing. An utter natural, she's so far been constrained by having to win seemingly endless awards in bittersweet Mike Leigh films, as if there's any other kind, but is now apparently freed up to slum it. Slum on, say I.

It's Butterflies for yet another generation, and as delightful. Again, a subtle mother - in this case a sudden widow- is the sane fulcrum around which certain fine madnesses, ranging from the silly to the grotesque to the heartbroken, revolve and tilt. It's a rather brave piece of engineering by BBC2 schedulers, gambling that the Friday night 10pm slot might attract an audience of wise young drunks, as well it might.

Manville is perfectly complemented by Peter Mullan, playing against type as seldom before - awkward, stuttery, shrinking, though I'd still never want to bat away his accent in a dark alley, and I'm bloody Scottish. Elsewhere, it's a dead heat for acting honours between Lisa McGrillis, as the son's exuberantly gauche girlfriend, and Dorothy Atkinson as the haughty sister-in-law, ("So what stopped you getting a pond in the end? Did you just realise it was...tacky?"). Two absolute stock comedy stereotypes, but seldom done better, and writer Stefan Golaszewski (Him & Her) somehow raises everything to a sharper level.

The praise lavished upon this anthology series from viewers and TV critics alike is justly deserved, and this episode is another cracker. In Nana's Party, Steve Pemberton and Reece Shearsmith (writing and directing) play prankster brothers-in-law who, with their wives (Claire Skinner as an OCD mum and Lorraine Ashbourne as her alcoholic sister), gather for Maggie's 79th birthday. Cue another delightfully ditsy turn from Benidorm's Elsie Kelly.

The half-hour unfolds like a micro-packaged Mike Leigh drama, with finely judged performances as secrets and lies are exposed in cosy suburbia. All it's lacking is Timothy Spall grunting.

To a suburban semi, where Steve Pemberton and Reece Shearsmith have gone a bit Mike Leigh. It's Nana's birthday party, thrown by Angela (Claire Skinner), the more successful of her two daughters. Into a house kept pristine by Angela's crippling OCD blows bitter dipsomaniac Carol (Lorraine Ashbourne). Pemberton and Shearsmith are the golf-sweatered husbands waging a cold war via practical jokes. As one prank blows up a mass of secrets, the script slides effortlessly from funny to dark to desperately sad.

We're back in the 17th century for the trial of Elizabeth Gadge (Mike Leigh favourite Ruth Sheen), an old crone accused of witchcraft by her own flesh and blood. The trial bodes well for local bigwig Sir Andrew Pike (David Warner), keen to attract visitors to the dismal village of Little Happens, whose sole attractions hitherto have been the green, a duck and a bench. Reece Shearsmith and Steve Pemberton play dual witchfinders, Mr Warren and Mr Clarke. (See what they did there?)

The loose anthology format certainly allows them to indulge their passions and peccadillos, here mining the Vincent Price classic, Witchfinder General, for flavour and chuckles. From the start, the arch performances call to mind a League of Gentlemen sketch where they dismissed a DVD movie for having "too much actinggg", but this dark tale soon works a devilish spell.

By my count, Miranda Hart has been on Graham Norton's show five times before, so if she has any self-deprecating anecdotes about awkward slapstick moments that she hasn't already shared, she will roll them out tonight. She shares the sofa with Timothy Spall, whose latest performance is as painter JMW Turner in Mike Leigh's biopic. Maroon 5 provide the music.

To Hull And Back review:

Stand-up Lucy Beaumont, the 2012 BBC New Comedy Award winner, writes and stars in this delightful sitcom pilot, a cross between a Victoria Wood sketch and a Mike Leigh film. She is Sophie, a daft ha'p'orth stuck living at home with her proud, junk-obsessed mum (Maureen Lipman).

But Sophie dreams of becoming an actress and thinks she has a shot when she gets an audition in London for "Third in the queue at Debenhams". There's a precise yet warm quality to the writing, including a rare fresh take on mishearing the Lord's Prayer, all enhanced by Lipman's peerless comic timing.

Natural Born Killers meets Mike Leigh's Nuts In May in Sightseers, a nimble, rug-puller of a romcom. All hail one of the best British films of 2012.