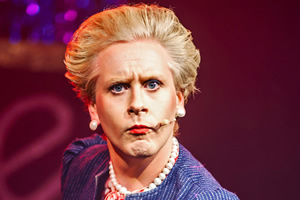 Margaret Thatcher Queen of Soho tells us who would appear in her government. She's gone for Paddington Bear as Defence Secretary, Prince George as Brexit Secretary... 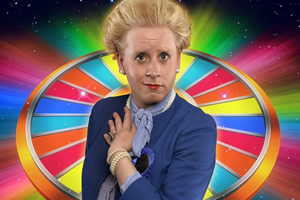 Not sure who to vote for? Former Prime Minister and global cabaret superstar Margaret Thatcher Queen of Soho has written this guide to the political parties.

First Look: An Act of God at The Vaults

After many millennia, and in just 90 minutes, God (Zoe Lyons) assisted by her devoted angels Michael (Matt Tedford) and Gabriel (Tom Bowen) will answer some of the deepest questions that have plagued mankind since creation.

The show uses a highly fictionalised Thatcher as a novel entrance point, but its message that everyone should be treated with respect - not just tolerated but loved - is tired. Brexit-incorporating rewrites of 2013's script are half-hearted. And overall, this is preaching to the converted. Anyone who pays to see tonight's show is already woke to its wisdom. So what does it add to our discourse around LGBT+ rights? The answer, likely nothing - but on a surface level, this 80s singalong's a rollicking way to spend an evening.

The best political comedy for 2019

A perceived left-wing bias and a reliance on lazy gags means that political comedy doesn't always enjoy the best reputation at The Spectator. But there are some excellent and unashamedly Westminster-focused acts currently gigging in the UK. Here are six of the best.

The best theatre, dance and kids shows to see

The best shows to see at the Edinburgh Fringe 2018.