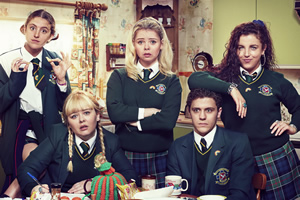 As the comedy returns for a second series, the stars of Derry Girls talk about the phenomenal success of the show. Plus, writer Lisa McGee tells us what to expect from the new episodes. 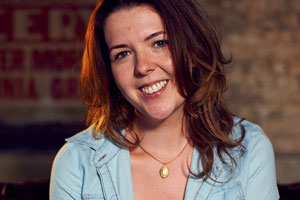 Writer Lisa McGee introduces her new sitcom, Derry Girls. Set around The Troubles in Northern Ireland in the 1990s, she explains the series shows how the area was still a "brilliant place to live and grow up" as a teenager.

The Channel 4 sitcom's creator has said she has an idea for Derry Girls on the big screen.

Could Derry Girls become a film?

Derry Girls' writer Lisa McGee has confirmed she is in "discussions" about a movie for the hit Channel 4 comedy.

The result is a rundown of 100 TV stars who've had a tremendous past 12 months. Fleabag co-stars Olivia Colman and Andrew Scott came 13th and 21st respectively.

McGee said the sitcom set in 1990s Derry against a backdrop of the Troubles was a negative reaction to Reservoir Dogs.

Yes, they do fancy each other - but it's more complicated than that..

Channel 4 has ordered a third series of hit sitcom Derry Girls following record ratings for the second series, which finished airing this week.

Lisa McGee's acutely observed yet rip-roaringly funny sitcom set against the backdrop of the Troubles wraps up what has been a terrific second season. It is November 1995 and the entire community is anticipating a visit from Potus-with-the-most Bill Clinton. For the girls, it's an excuse to try to become BFFs with Chelsea. For shady shopkeep Dennis, it's a pretext to flog off-colour Yank tat. And for Granda Joe, it's a chance to settle an old score with Uncle Colm dating back more than 30 years.