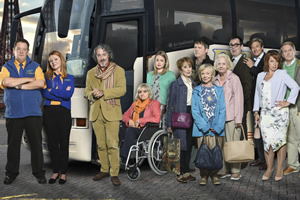 Murder On The Blackpool Express interviews

Comedy murder mystery show Murder On The Blackpool Express is packed with top actors. Here the 13 stars talk about their roles in the special.

A decade on from freshers, TV's top students remember their raucous heyday. "We were basically dirty, smelly Friends".

The Tuckers to return for two more series

BBC One Wales has ordered two more series of The Tuckers, the sitcom written by and starring Steve Speirs.

Murder On The Blackpool Express preview

While Murder On The Blackpool Express is probably not an instant classic, the playfulness of its fine cast make it an affable diversion, and a happy slice of family viewing (9.30pm actually seems like too late a slot) that could bear many a bank holiday repeat.

Murder On The Blackpool Express review:

The Christmas spirit has already started this year. Not just with the John Lewis adverts but with this comedy.

I don't think I've ever seen a more impressive cast lined up for a TV comedy than the one Gold has assembled for its special one-off original commission Murder on the Blackpool Express. So I ought to namecheck them, oughtn't I?

There's Johnny Vegas, Sian Gibson (best known for Peter Kay's Car Share), Nigel Havers, Una Stubbs, Griff Rhys Jones, Nina Wadia, Sheila Reid, Kevin Eldon, Mark Heap, Kimberley Nixon, Katy Cavanagh, Matthew Cottle, Susie Blake and Javone Prince. There you have them: some of the best comedic talent from the past half a century or so - and a lot for the scriptwriters and directors to live up to.

Where do you go with that lot? Well, Blackpool, obviously, on a "literary coach tour" with Vegas driving and Gibson as the guide, but also a journey of detective investigation to discover exactly which of the assembled odd bods did for pensioner Marjorie, murdered by means of a dodgy cob with coronation chicken filling. There's one clue for you. Remember: Means, Motive, Opportunity. Enjoy.

Murder On The Blackpool Express news:

The cast has been announced for Gold comedy Murder On The Blackpool Express with Johnny Vegas and Sian Gibson leading an all-star cast.

As usual, these six episodes were wince-inducingly familiar for anyone who's every sat through a terrible job interview, thrown a half-arsed party or embarked on an ill-advised relationship, touched with moments of real pathos as the gang said one final farewell to their student home.

We say a fond farewell and rather a sad goodbye to the students of Manchester Medlock University in the final episode of Fresh Meat. As a massive fan of all four series of the comedy drama I was hoping for a satisfying finale and thankfully I wasn't disappointed. The episode started with all of the gang, bar second year Josie (Kimberley Nixon), learning their final grades for their course. Most got what they were expecting with the exception of Vod (Zawe Ashton) who achieved a 2:1 and Oregon (Charlotte Ritchie) who got a 2:2 despite her feeling that she deserved a better grade. There was also good news for Howard (Greg McHugh) as he achieved his dream of a first and a job at Ordnance Survey however he briefly believed that all of his housemates would be coming with him. Luckily after working at Vod's graduation ball, which was moved to their house, Howard acquired the social skills he needed to live with other people. Elsewhere Josie finally realised that she had feelings for JP (Jack Whitehall) especially after he finally stood up to his brother and rejected an offer of the job at his bank. Instead JP hoped to live his dream of being an estate agent and if he was really being able to drive one of those minis. I do feel that everybody pretty much got what they deserved and the extra scene that was available online saw all of the boys living together whilst Vod and Oregon were in Laos researching the latter's novel. I did worry that writer Tony Roche would have a lot to get through but I think he gave each character an equal amount of time however I felt that this final episode deserved a little more than fifty minutes to wrap everything up. As is always the way with Fresh Meat, the comic moments were incorporated with elements of drama such as JP standing up to Tomothy and Oregon finally revealing her true self to her parents. My favourite revelation of this final episode had to be the fact that Howard actually lived two streets away from the share house and that his annoying parents kept trying to invite the rest of the gang round. Overall I feel that all six of the cast members have benefited from their time on Fresh Meat and most have already gone on to bigger and better things. So while I've enjoyed spending time with the gang over the past four and bit years I feel it's best that we never return to see what these characters are up to again as it would spoil for what has been in my opinion an almost perfect series.