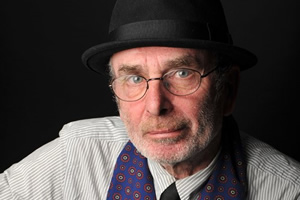 John Dowie: A gig I'd prefer to forget

An extract from John Dowie's book. He tells the story of how he got rather drunk at a gig in the 1970s.

Veteran comedy writer John Langdon has died. Langdon was one of the country's most experienced comedy writers, working on classic programmes including Not The Nine O'Clock News and with Kenny Everett. He also worked on The News Quiz and most regularly with Rory Bremner.

John Dowie on his death, dentists and other Dowies...

So I had a blog chat with poet/comedian/writer John Dowie. I was going to the dentist. We arranged to meet when I was finished. "You might as well come to the dentist in case he's over-running," I suggested. "Charming as your dentist's waiting room undoubtedly is," John Dowie replied, "I will be in this pub down the road." And he was.

Ahead of his appearance at Fringe by the Sea with his memoir, John Dowie speaks to The Skinny about being the first solo comedian in Edinburgh.

He'll spend just as long talking about a mechanical failure on his bike as he will these showbiz anecdotes, just to reiterate the point this is definitely not a memoir.

In the third part of our Fringe history, two long-forgotten venues put comedy before theatre with the help of Austin Powers and a Wonder Dog.

In the first of a series of articles to celebrate the Edinburgh Festival Fringe's 70th anniversary, we look back at the remarkable rise of stand-up comedy and how it came to dominate the once theatre-heavy programme.

Writer/performers Dave Cohen and John Dowie are one gig away from the end of their current world tour.