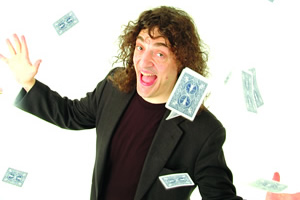 Jerry Sadowitz is bringing his show Card Tricks with Inappropriate Patter to London. In this article we contemplate his career and remember our previous bruising interview with him. 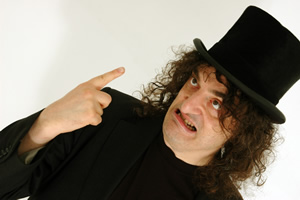 Jerry Sadowitz sent back some strongly worded answers when BCG emailed him to ask him some questions about his 2016 tour.

We emailed Jerry Sadowitz some interview questions. He HATED them. Read his 'robust' answers in this feature.

Jerry Sadowitz auctions himself on eBay

Jerry Sadowitz is auctioning himself off on eBay. Or to be precise, he's offering a private comedy-magic gig to the highest bidder.

The Caird: Hecklers, Kevin Bridges and the Big Yin

Unfortunately, it comes with the territory. Any comedian courageous enough to step onto the stage - whether it is in a 20,000 seater arena or in a dank pub basement - has to be well-equipped to deal with hecklers. However, be warned, disruptive outbursts from marble-mouthed louts will never be tolerated at the Caird Hall.

All events at the King's Theatre, including Stewart Lee, Jerry Sadowitz, Janey Godley, John Shuttleworth, Fascinating Aida, Susie McCabe and Jim Smith, are to be postponed.

Reports suggest that when Sadowitz saw a man clambering over seats, he asked if he was on his way up to the stage to assassinate him. However, it then became apparent that another man had stopped breathing and had to be taken out of the theatre. Sadowitz reportedly said: 'Stopped breathing? That's all I need on my fucking CV isn't it?' and left the stage.

Sadowitz is the last of the underdogs and tonight's performance is one of the most scabrous comedy shows I've ever witnessed.

As the Glasgow International Comedy Festival prepares to launch with a gaggle of giggles later this month, we count down Scotland's funniest 60 people.