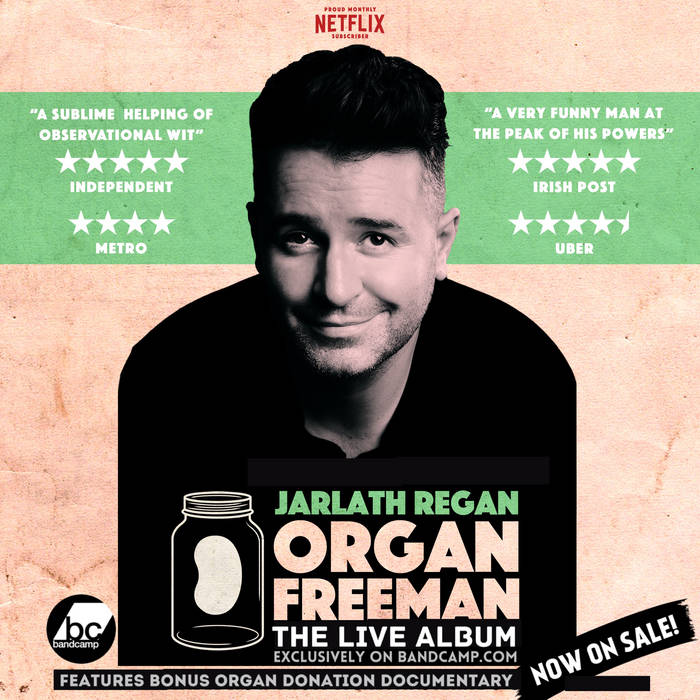 Organ Freeman is a stand-up story show and accompanying documentary about what happens when your brother asks, "Will you give me a kidney?" This is the story of what happened to Jarlath and his brother Adrian in 2017. Get busy giving or get busy dying.

"Superb piece of storytelling. An Edinburgh show that has as much heart as it does laughs." (Chortle)

"Regan is an expert storyteller and this is a beautifully constructed show that I could have happily listened to for twice its length." (Arts Desk)

"The real stakes and jeopardies are revealed as his account unfolds, teased out from some deceptively light but skilfully seeded stand-up that confirms Regan's abilities to move with belly laughs and tears in a single routine. Moving, at times hilarious, this show makes a compelling argument for organ donation." (The Scotsman)

"His ability to navigate this story with such finesse and heart, without removing any of the humour, is impressive. By the end, the reasoning behind the comic observations made at the beginning become clear and you're left feeling moved and inspired by this honest account of a profoundly complex experience." (The List)

The album is split into tracks but this is intended to be a unified story of the journey, the process, the moral dilemma of having to risk your life when others are depending on it. The show earned a series of glowing reviews from the press and audiences at the Edinburgh Fringe in 2017, toured the Ireland and UK, was nominated for (but didn't win) an award but most of all it raised awareness of the life changing power of organ donation.