James McNicholas - The Champ & The Chump

A heart-warming, hilarious true story about fighting and family, based on the acclaimed stage show. For fans of books by Dave Gorman, James Acaster and Danny Wallace, along with boxing tales from the likes of Tyson Fury and Ricky Hatton.

The Champ: Terry Downes - known as 'The Paddington Express' - was a rough and ready boxer, US Marine, gangsters' favourite and world champ, defeating fearsome fighters like the great Sugar Ray Robinson. At the time of his death in 2017, he was Britain's oldest living world champion.

The Chump: James McNicholas's school PE teacher once told him he was so unfit he'd be dead by the time he was 23. James has spent his life pursuing a career in acting. In reality, that has meant spells working as a painter-decorator, wine merchant and salesperson for Viking River Cruises.

After Terry's death, James decides to retrace his grandad's footsteps to see just how it is that two people so close could be so different. It is a journey that takes James from London to Baltimore, to army bootcamp and a brutal boxing regime. And when James is a diagnosed with a neurological disorder, the symptoms of which replicate those of concussion, the two stories suddenly collide. 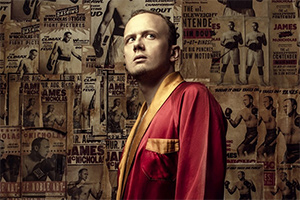 James McNicholas to publish The Champ & The Chump book

Comedian James McNicholas is to publish The Champ & The Chump. Based on his hit live show, the book tells the real-life story of what happened when he retraced the footsteps of his boxing champion grandfather.