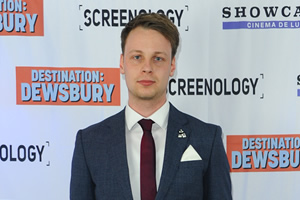 Jack Spring started making a comedy film at 19 years-old. In this article he talks about how he got Destination: Dewsbury to the big screen, and what he learnt in the process of doing so.

Dad John Spring, 55, said: "We're very proud of Jack, it takes a lot of effort to not only make a film but to raise funding and persuade others to get involved."

20-year-old Jack Spring is in Cannes hoping to get backing for his first film Destination: Dewsbury.

Jack's playing it for laughs in Dewsbury

A new comedy movie is set to be filmed in Dewsbury and Batley.

Filming for new movie due to start

Filming for a new movie set in the heartlands of Yorkshire will begin in the district soon and producers are urging local people to apply to be extras in the film.

Director Jack Spring said: "Destination: Dewsbury is the first time everyone in the crew, including myself, have had the freedom and the funding to achieve what we want, how we want it and it's been a serious but very exciting learning curve so far.