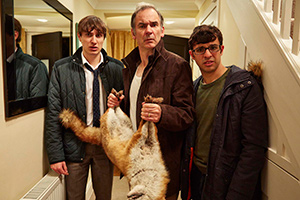 How to write great characters who work with the plot

Jack Bernhardt discusses how to ensure that your plots and characters are working together... so there's never a scenario where you character ends up doing something they absolutely would never do.

Over 400 tasks are whittled down, in our ranking of the best challenges set by Alex Horne and Greg Davies.

Comedy is a tool, a trick - Ukraine will soon see

Comedy is a tool, a trick - Ukraine will soon see, running a country is no joke.

The BBC comedy chief says social media is stopping comedy from testing boundaries. Has he seen Fleabag and Derry Girls?

Following Jack Bernhardt's article on rebooting 70s sitcoms, such as Dad's Army and Fawlty Towers, many of you went below the line to share your thoughts on the best sitcoms and whether you think the format works today. You can join in the discussion by clicking on the links in the comments below.

Is there still a place for sitcoms in today's world?

The sitcom's gig might be over, with audiences' lust for comedy being served by competitive baking shows and reality TV.

Force everyone to try standup comedy to mend our world

The benefits to society would be profound - not least that people would learn the difference between a joke and a threat.

Politics is beyond satire: can the Mash Report keep up?

The Daily Mash's new satirical TV show has a hard challenge ahead as the web spews out gags with lightning speed - it needs to find a distinctive voice.