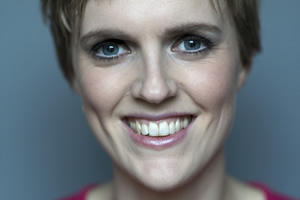 Holly Walsh talks about making The Other One

Holly Walsh talks about co-writing and directing BBC comedy The Other One. She discusses how "character is everything".

Holly Walsh - The Other One interview

Holly Walsh talks about writing her great new BBC sitcom pilot, The Other One.

The Other One, Holly Walsh's gleeful twin-family saga ended (if you've been watching in real time) on a real high. It had many terrific lines, mainly - as usual - from Ellie White as Cathy, whom you suspect the writer most identifies with. One clue: she gives her the sharpest lines. After she has been given a particularly gaudy tiara-and-mascara makeover by Cat (Lauren Socha), dowdy safe Cathy declares to the mirror: "Oh My God! I love it... I look like I could have my own show! On ITV3!" Marilyn (Siobhan Finneran) finally makes it out of the house, Rebecca Front's Tess finally forgives cheating Colin (Simon Greenall) and, after a cheeky red herring, the stage is well set for a second series. There have been harder recommissions to predict.

TV review: The Other One

Despite all the jokes about class, Marcus's disastrous 'dick pics' disaster and the essential betrayal at the heart of the Walcott's marriage, there's a real sweetness to the developing relationship between the two Catherines which makes this a joy to watch.

TV review: The Other One series 1 episode 1

How well you get on with The Other One will depend on your tolerance for cringe factor.

In September 2017, I wrote that The Other One was a BBC comedy pilot in search of a commission: it gained that commission and returned this week - albeit with the rerun pilot (boo), but over the next six weeks it will delight and enthral with high humour and low blows from writers Holly Walsh and Pippa Brown. The only true mystery is why the fandoodle it took so long.

It is a glorious slice-of-life comedy, way superior to so much else on these days. OK, the plot is a twitch forced - bigamist dies, leaving two disparate families, in two utterly disparate class zones - but the warmth of all within, the sharpness of the writing, the performances, particularly from Ellie White as the smiling uptight coil of a spring who can't quite leave a middle-class totem untouched and Lauren Socha as the unsprung spring who can't quite leave a working-class totem unsaid... in this will lie a certain dramatic magic.

The Other One review

Motherland writer Holly Walsh has created a cheering portrait of a family brought together through loss.

The Other One news:

The comedian, comedy writer and TV producer on the things that make her laugh the most.

The Other One interview:

Holly Walsh: 'Half my ideas come from talking rubbish'

The comedian and writer tells Robin Parker about her inspiration for her BBC1 comedy The Other One and the isolation of working in lockdown.

The Other One interview:

"Comedy is like the church - a lot of female vicars, not many female bishops".