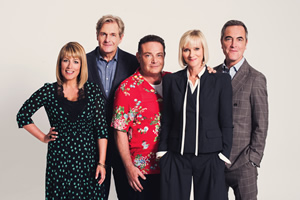 The cast of Cold Feet talk about returning for an eighth series. They say it's one of the best series yet.

This charismatic gang still feel like old friends - but it's a wise decision to bow out now.

Emotional honesty, plus a blast from the past for Adam.

Cold Feet review: Less than the sum of its parts

More than two decades since Cold Feet first arrived on screens, the new series is a curiously uneven watch - and not as much like putting on a comfy old cardy as you'd imagine.

ITV has confirmed that its long-running hit comedy drama Cold Feet will return in 2020 for a ninth series.

James Nesbitt's Adam has finally grown up - his relationship with Karen (Hermione Norris/p]) has been a highlight in a superlative series.

The drama about middle-class Mancunians has hit its stride at long last - thanks largely to a love affair that's been bubbling under since the 90s.