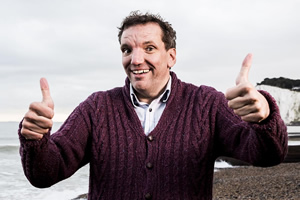 German comedian Henning Wehn talks about why he moved to the UK, and introduces his Channel 4 comedy series An Immigrant's Guide To Britain.

How the Germans sold English comedy back to the English

The success of stand-up Henning Wehn, the self-styled "German Comedy Ambassador in London", who is now a UK TV panel show regular, has already softened up the UK for a Teutonic comedy invasion.

Brexit is hardly a barrel of laughs - unless you are in the company of Henning Wehn, the self-proclaimed German comedy ambassador.

Have I Got News For You blog:

One Brexit positive? It may make HIGNFY watchable again

The panel show hasn't been funny since at least 2012. But the sheer stupidity and self-destructiveness of our politics may just help it rediscover its bite.