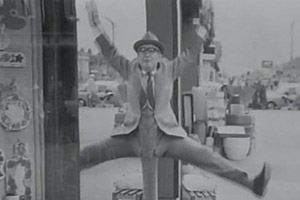 In the run-up to the 2019 General Election, Graham McCann recounts the curious tale of Harold Wilson, Harry Worth, and two raincoats.

Lost Hugh And I and Here's Harry episodes discovered

Two valuable, previously missing BBC sitcom episodes from the mid 1960s have been rediscovered, from comedies Here's Harry and Hugh And I.

Spirited buffoon Count Arthur Strong returns to wade through more malapropisms with his pals from the scruffy café. Arthur, a former actor long past his glory days, carries on like an actor playing himself in a film of his life. He's an acquired taste, a Radio 4 staple where he was adored and derided equally, and now a television presence, whose first series two years ago didn't trouble a mass audience.

This is all irrelevant, of course, if you find Arthur (created and played by Steve Delaney) a joyously funny poltroon very much in the vein of Harry Worth. As we return, Arthur's friend Michael (smashing Rory Kinnear) arrives after six months in Yorkshire, suffering from writer's block. And he finds that Arthur has written a "racist" novel, a "Fifty Crates of Plates for the over-70s".