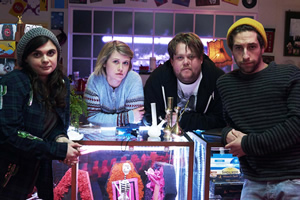 The Trouble With Maggie Cole review:

The Trouble With Maggie Cole review

If Dawn French gossiped like this in real life, she'd be in big trouble.

The Diary Of My Broken Vagina review:

Review: The Diary Of My Broken Vagina

The Diary Of My Broken Vagina is another of Channel 4's pilots from their Comedy Blaps series that might get a full series if it's popular enough or receives critical acclaim. It definitely deserves to as Fran Bushe's comedy is a smart, funny affair where she worries that her vagina might be broken as sex is either painful or very unsatisfying, and so decides she finally needs to remedy this situation asap.

BBC Two has ordered a second series of Defending The Guilty, the legal-based sitcom starring Will Sharpe and Katherine Parkinson.

In the penultimate episode of this breezy litigating comedy, our ethically compromised trainee barrister Will (Will Sharpe) is put through his paces this week in a mock trial, where he learns the art of cross-examination, while rivals Danielle (Gwyneth Keyworth) and Liam (Hugh Coles) have a romantic run-in with their fictional clients.

Defending the Guilty smartly sends up nepotism and idealism in the criminal justice system.

BBC Two is Defending The Guilty in new courtroom comedy

Will Sharpe and Katherine Parkinson are the stars of a new comedy about the legal profession, ordered by BBC Two.

Created and written by Jon Foster and James Lamont who previously worked together on Cuckoo and The Armstrong and Miller Show, Wasted follows the fortunes of four youngsters who wile away their days in the fictional West Country village of Neston Berry. The first episode begins with the return of Kent (Dylan Edwards) who has unsuccessfully tried to make it as a DJ and now is trying to weasel his way back into his old life. His return his met with great acclaim by his best friend Morpheus (Danny Kirrane) who runs a weird souvenir shop alongside his sardonic sister Sarah (Rose Reynolds). The back of the shop is home to Alison (Gwyneth Keyworth) who runs a new age healing business and whom Morpheus has a long-standing crush on. The opener sees Morpheus try to impress Alison by hosting a pub quiz after she reveals her secret desire for Jeremy Paxman whilst Sarah attempts to become a drug dealer with very negative results. Just like with Borderline, a lot of what happens is Wasted is quite cliched especially the scenes in which Morpheus has a drug overdose while hosting the aforementioned pub quiz. However I do feel that Foster and Lamont have perfectly conveyed the feeling of living in a small town where there is very little for the young folk to do. Wasted has probably garnered the most publicity due to the fact that Sean Bean makes several cameo appearances as a manifestation of Morpheus' subconscious. Whilst Bean's appearance may feel like a gimmick these dream sequences do add a new dimension to the sitcom and make it stand out from the crowd. Bean also seems to be having a great time with the dialogue he's been given and I'm sure he's happy in the fact that as he's a figment of a character's imagination he won't be killed off. I found all four leads to be energetic and believable in their rolls with Kirrane being especially on form as the sympathetic nerd Morpheus. Whilst Foster and Lamont's sitcom isn't perfect I feel that it features the best representation of young people in a sitcom for a long while. Whilst it's still a little rough around the edges I thought that Wasted shows buckets of promise and is perfectly suited to the young audience that E4 is aimed at.

Wasted was by no means perfect - a scattergun approach meant some gags fell flat and the surreal set pieces occasionally smacked of studenty self-indulgence - but it had a riotous energy and a cheekily irreverent approach to its headline-stealing cameo. Cool Beans.