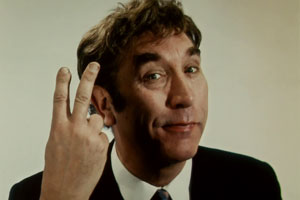 On the centenary of Frankie Howerd's birth, we take a look back at his career and some of his most celebrated roles.

Frankie and Benny: A remembrance

The last great Ealing Comedy, in a pristine restored print.

A new play about Frankie Howerd's personal life is to tour. Howerd's End focuses on the clandestine relationship between the comedy star and his boyfriend Dennis Heymer.

It seems that every day a new showbusiness career lies in tatters as the world finally catches up to the men who abuse their power to harass and grope women. But for decades bad behaviour has gone unpunished... here are seven comedians beloved in their day - and some even now - despite widespread reports of pretty salacious behaviour that surely would not be tolerated today.

She represented Spike Milligan, Tony Hancock and Frankie Howerd. But Beryl Vertue refuses to believe that comedy's best days are behind us.

Howerd's End, a new play about the career and private life of Frankie Howerd, has been announced. The script by Mark Farrelly has been endorsed by the Frankie Howerd Trust.

A new blue plaque dedicated to comedy actor Frankie Howerd has been unveiled at his birthplace in York.