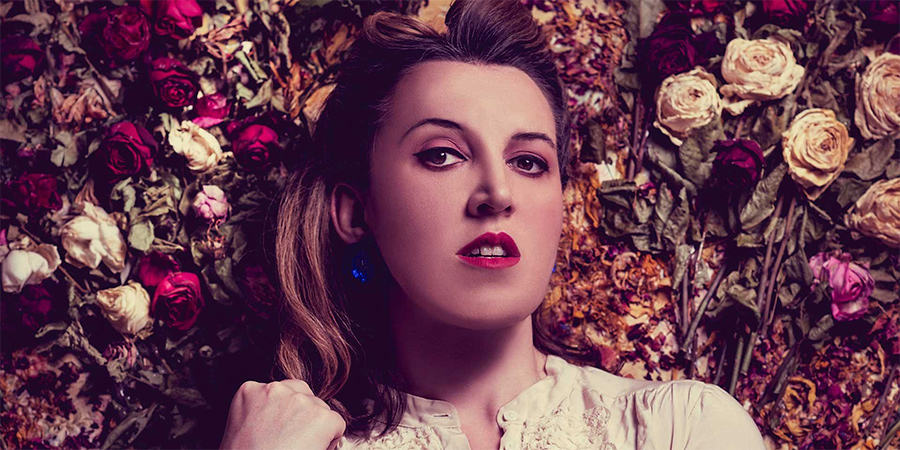 Eleanor Tiernan on sex tapes, OnlyFans and recording from home in a pandemic

"Being in the closet is great preparation for a pandemic" notes Eleanor Tiernan drily. "I've been very able for all the staying in, I've been staying in for years."

The London-based Irish stand-up revealed that she was a lesbian on a podcast last June, unprecedentedly coming out at a time when no-one can actually go out.

"Yeah, the expectation is that I'd be trying to make up for lost time I guess" she laughs. "But that just hasn't been possible."

After sharing her sexuality with those close to her last February, the comic publicly disclosed it on fellow stand-up Rich Wilson's Insane In The Fem Brain podcast. Although it might seem a thoroughly modern step to take, it just made sense she explains.

"I had liked the podcast and wanted to be on it" she says matter-of-factly. "Once I'd come out to my family and friends, it still felt like a hurdle needed to be got over. I didn't necessarily want to be talking about it at length on stage. But I didn't want to just drop it in without ever mentioning it before. 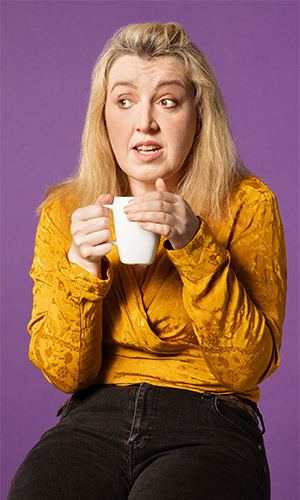 "If the Edinburgh Fringe had happened last year, I probably would have done a show about it. But it didn't. And all the while, I wanted to continue to interact with people online, producing bits of content. The podcast was a space where I could talk about things like that, have the conversation with Rich and give it some kind of background. And if anybody's in a similar situation, they might be interested to hear it too."

Having been inspired by television presenter Phillip Schofield's admission that he was gay, she subsequently expanded on her decision to come out in her forties after wrestling with her sexuality for decades, in a first-person account for The Irish Times.

"Honestly, I've gone back and forth on how to talk about it comedically. I guess one of the good things about having to take a pause now because of the pandemic is that I don't have to rush that and can just find what's funny about it in my mind, rather than picking up on a perspective from outside that I should be talking about this or that. That's been taken away but in a good way. I know that whatever I do next it'll be about what's funny rather than being earnest and meaningful."

Characterised by an eccentric, idiosyncratic logic, Tiernan's onstage persona is almost idiot savant like in its unworldliness, yet with a committed dedication to its skewed, contrarian perspectives. Always mischievously playful, when she was a newer comic, it was likened by a friend to that of "a teacher who'd been let go from her job for doing something inappropriate but is still in denial about it."

She has mixed feeling about that description now. "You know what, probably at the time I thought that was a clever thing to repeat. But it isn't too far off the mark actually. The way I deliver things, it sounds like I'm studious and really trying to understand the issues involved. But what I'm talking about is absolutely bonkers.

"I come from a very straight-talking world. I used to be an engineer in the [Irish] civil service. There's a whole language around that and whole way of seeing the world. I probably borrow from that whole mindset but use it to talk about things that you just wouldn't talk about, that would never be a subject in that world. Like sex tapes for example." 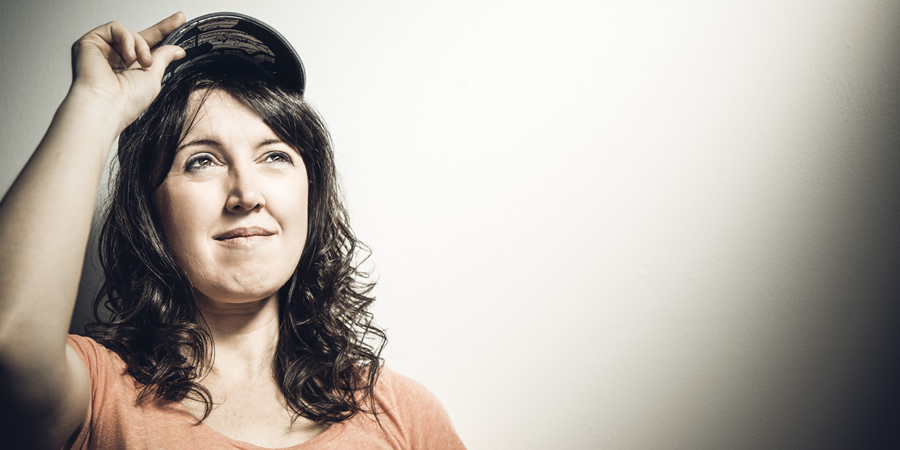 Which brings us neatly onto Tiernan's debut Radio 4 special, Success Without A Sex Tape, updated from her 2018 Edinburgh Fringe show of the same name. The subject matter sounds contemporary and yet somehow passé, like we hit celebrity sex tape peak a few years ago and the phenomenon has been subsumed into mainstream culture.

Tiernan agrees. "You're right, they're not something we're hearing a lot about. But at the same time, with OnlyFans streaming now, it feels like the world has adapted and is normalising this kind of stuff, which is what I say in the show. We're all 'performing' so much online now, technology is changing and affording us more opportunities to do that. You're walking down the street, finding the perfect place to take your Instagram shot. I see it as part of one continuum, with sex tapes nothing too different from that."

Continuing on that theme, Tiernan recorded her prestigious Radio 4 special - that highly prized marker for a comedian's career progress - via Zoom and remotely from her home.

"I really enjoyed it" she recalls. "The audience were watching me on a screen but they were being recorded down the line and I could hear their laughter through my headphones. There was a slight delay in the laughs, which is a little heart-stopping when it's something you're putting out into the world.

"It also made it a different performance though, I had to slow down. It lends itself to a more thoughtful style and it influences the kind of material you might do. That played to my strengths in this particular case."

With live comedy restricted to online for the time being, Tiernan has found herself lacking a sounding board for her stand-up. "I miss the consensus of other comedians" she admits.

"I don't have any sense of what's normal any more or how everybody's doing. Even with Zoom gigs. Because everyone's laughter is coming from a different place, there's no sense of something working in the room. The sound technician that puts it all together at the end, they're the only person that gets to know. So I miss that. It feels really important now and I haven't had it for a while."

However, she's not missing her relentless gigging schedule. "I'd find it hard now to go back to the amount of travelling I used to do" she explains. "I was on a train four days a week, getting back to London about 1am. Now I'm like, 'God, how gruelling was that?' Looking back through my diary, how did I make all these appointments in different parts of the country?

"So I've been thinking about how I can be a bit more forgiving in the future going forward as a lifestyle. Zoom will be part of that I think. And maybe more radio might be a nice outcome of this." 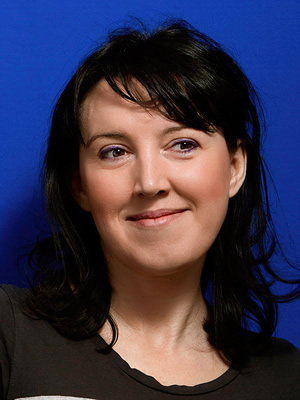 She left Dublin for London five years ago and is managed by the powerful agency Avalon, whose roster includes Russell Howard, Greg Davies, Lee Mack and Rose Matafeo. Tiernan maintains that "I'm terrible at being strategic career-wise. I'm not engaged with the comedy industry. When I got an agent I was like, 'oh yay, somebody likes me', rather than thinking 'what can I expect now and how can I use this?'

"I was seeking new experiences and adventure but I also wanted to become a better stand-up. And [moving to London] was absolutely the right thing to do. I remember doing an early gig in the middle slot, Tony Law was opening and Milton Jones closed, feeling like I just about got away with it. Because London sets the standard, you've got headliner after headliner. You've got to work so much harder and that's just what I wanted."

Right now, she's working on more episodes of her spoof court reporting YouTube series Before The Courts, which she co-writes with comic John Colleary, and which began life on the RTÉ television show Irish Pictorial Weekly. And she's written for other comedians' television projects, most notably Scottish stand-up Iain Stirling on CelebAbility and his forthcoming ITV2 sitcom Buffering. That experience of working with the voice of Love Island has been "liberating" she explains.

"I haven't written for many people but he's a great person to write for. He's got a very clear persona and his accent really helps, when you can hear that so strongly in your head, it makes it a lot easier."

"I give that credit too for giving me a bit of a push to come out of the closet as well" she says. "I've no idea how this works but feeling physically stronger and more capable had a mental effect, made me think I could deal with whatever, any challenges that could come my way."

And she's started selling her own limited range of merchandise on Etsy. All proceeds from her Shop For Goods of Questionable Use go to charity. "It's just a bit of fun" she remarks of the pandemic-ready To Don't List.

Success Without A Sex Tape is on BBC Sounds