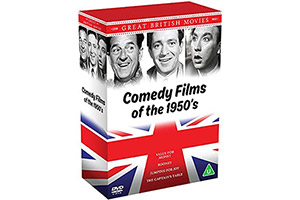 Monday 14th June 2021
This feature refers to an event that has now finished.

We have box sets to give away featuring a selection of comedy films from the 1950s, with stars including Frankie Howerd, Donald Sinden, Stanley Holloway and Diana Dors.

Acclaimed actor Sir Donald Sinden CBE, star of sitcoms Never The Twain and Two's Company, has died at the age of 90.

Renowned for his rich, booming voice and commanding presence, Sir Donald Sinden, who has died aged 90 after a long illness, was a star of stage, television and radio for seven decades.

Never The Twain ran for ten years on ITV. Ten years! Donald Sinden and Windsor Davies were two rival antique dealers, continually trying to get the better of each other. A sample of the writing? "I started at the bottom, you need brains there." The punchline? "Well, your brains are in your bottom." This drivel ended in 1991.