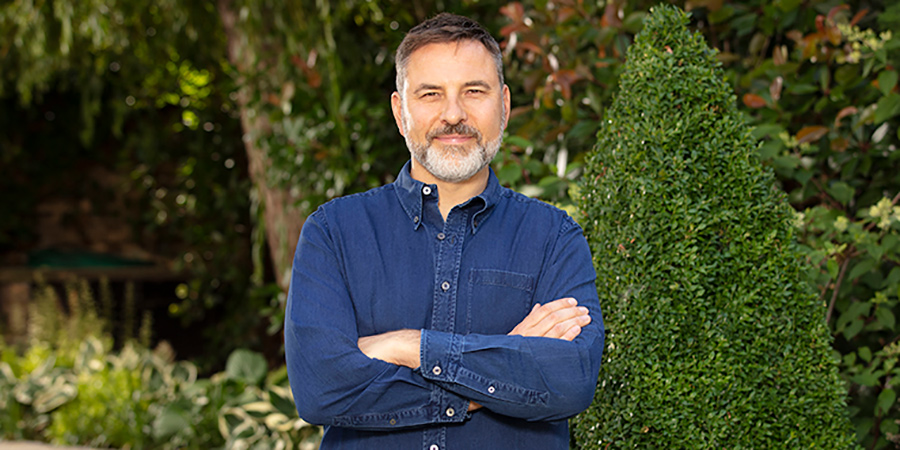 David Walliams - 'Who Do You Think You Are?' interview

David Walliams talks about taking part in genealogy show Who Do You Think You Are?...

What made you want to take this journey into your family's history?

I realised how little I knew, and with all my grandparents having passed away over a decade ago, my dad has passed away as well - so I didn't have many people I could ask about the past. Apart from a few black and white photographs, I didn't know that much. I knew unless I took part in the programme I would never find out, because there's a lot of detective work and it's quite complicated, and you have to travel all over the country or even the world gathering information from here, there and everywhere - so the show seemed like the perfect chance to do that. And also, I'm just more interested in stories than ever before. I love writing stories but in this case the story was already written, I just had to find it out.

Was there anything you were particularly worried about uncovering when you agreed to take part in the show?

No because we went a long way back, looking at events in the late 19th century, early 20th century, so long before anyone in my family alive now was born. 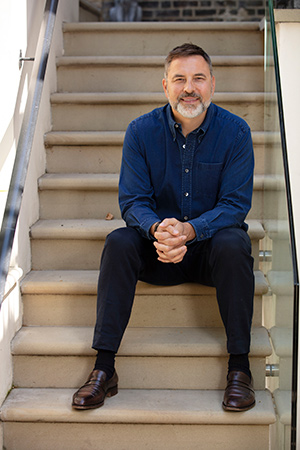 Could you briefly summarise the two family stories that we follow in your episode.

The second story is about my grandmother on my mother's side, and it's about her grandfather - who was a colourful figure. He was blind and had many jobs, and he ended up being a showman - which means running a fair. My grandmother had never told me about him, because she was embarrassed that she thought her upbringings were humble. These are not my feelings about this, those were my grandmother's. So, she never spoke about him.

They were both very different stories, but their characters really shone through and I found both stories really engrossing.

Did you have any hopes about what kind of ancestors would be uncovered?

I hoped that I'd have some exciting stories in my family, because I thought I was going to make a really boring hour of television. I was glad that I didn't know too much, so it was a proper journey of discovery for me.

The two stories are very emotional - my great-grandfather in WW1, and that was an incredibly sad story. Visiting the locations of the battlefields of WW1 was not something I would normally have done, and I found that very emotional. It did make me stop and think that when and where you were born is a complete accident. If had been born over a hundred years ago I could have ended up in a similar situation to my great grandfather. And so you start to think, "What would I do in that situation? How would I react? Would I be capable of heroism?" It's interesting to put yourself in someone's shoes who you're genetically close to, but happened to be born in another age.

Was filming an emotional experience for you? And how do you feel about the process several months on now you have had time to reflect?

There's a bit of a mystery to it, because the producers and directors don't want to tell you anything before you're there. They want you to react in the moment. You often don't know where you're going, who you're meeting, what you're going to uncover -so they get your real reactions.

It was emotional, because those lives are so different from my own, and so difficult too. Neither life was enviable. Obviously, ending up in a Mental Health Hospital after being shell-shocked is hellish, and as for the showman, being blind, especially then, must have been hard. 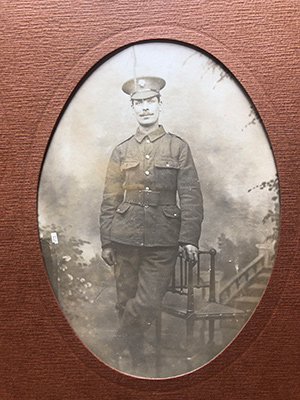 Can you tell us a bit more about if/how your grandfather's war experience impacted you personally?

It's just a very sad story. Although I think he was very well cared for later in life, it's not something you would wish on anybody. I'm sure that there were many other men who had the same experience. Those signing up to fight in France in 1914 did not know what hell was awaiting them there. Even if you were lucky to get out alive, it was very likely that you'd be affected for the rest of your life by the trauma of being in these terrible battles. He lived with it for the rest of his life. I had a few postcards that he painted, whilst he was in the Mental Health Hospital and I always treasured those, because they were so delicate and beautiful. It was just a very moving human story.

You actually physically went to a trench similar to the one John would have been in - was that was a really surreal experience for you?

I'd never been in a trench before. You don't hear anything good about WW1. With and WW2 there's loads of exciting movies - I'm sure it was hellish too, but it just feels like it was a different type of experience. WW2 is constantly revisited as entertainment, whereas WW1 just seems like misery, and so being in a trench gave me a sense of having to live in what was basically an enormous sewer. The day we went, it was pouring with rain, so I got some sense of the quagmire, and as much as you're trying to fight, you're also just trying to survive and get through the day

We'd love to hear about your reaction when you found out about your great-great-grandfather, William Haines, and how he was a travelling showman? And how entertaining actually runs in your family?

Well I was glad that there was some link, because obviously you are often thinking about what shaped you, why did you get drawn to certain things - being on stage, or trying to make people laugh, or writing stories; whatever it is. So, the fact that he was quite a flamboyant character and was a performer of sorts - I mean, he had an organ and a monkey and he used to play his organ on the streets, and the monkey would have a little hat and collect money. That is what his job was, so not quite the same as me, but he did something to entertain people.

He seemed to be eternally optimistic - he was just winding up the organ, but said on a form he was a professional musician, which makes you think he might have played the violin in an orchestra! And to become part of the travelling community - and become a showman, that's quite something, because it's a closed world as it's passed on from generation to generation. 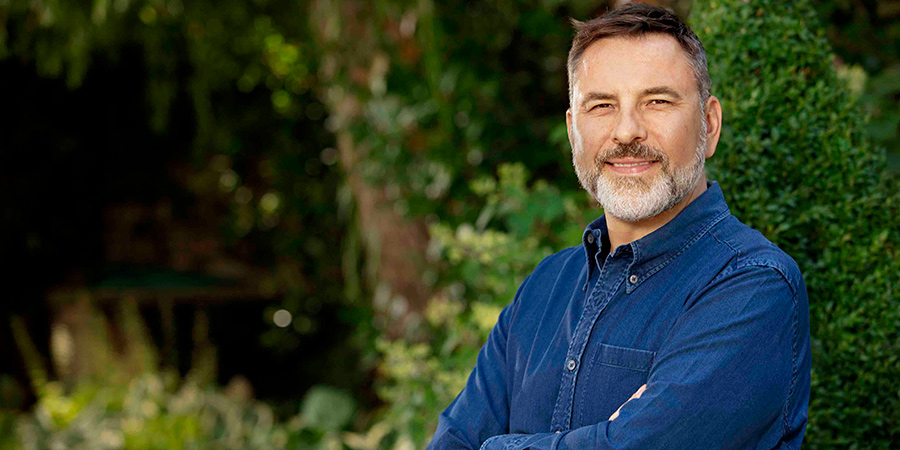 Do you think any of these ancestors might help inspire a future book or TV project?

Not an immediate one, but you never know. I have written books that have touched upon aspects of my family life before. Gangsta Granny was slightly inspired by my grandma; Grandpa's Great Escape was inspired by my grandpa, so it's not impossible, but I don't have an idea right now.

I do think that the past is an exciting place, and it always throws up interesting ideas for stories. My new book is set in WW2, and I've had other books set in the past - I've done one set in Victorian times, I've done one in the 1930s, and it's great, it really energises your imagination. So it may be that something comes from that. Certainly the world of travelling showmen and travelling fairgrounds, that world, or circuses and stuff, is a very rich one for children's books. WW1 has obviously been covered brilliantly by someone like Michael Morpurgo, but it feels like a very serious subject and not necessarily one I would tackle - there's not much humour in it, but who knows. Maybe one day.

How did you find showing a more serious side of yourself on camera?

I didn't mind it. I think the thing is you just have to be yourself, because if you start acting it's going to look really corny and stupid. I've been in situations before, doing documentaries - swimming the Thames or the Channel, going on trips to Africa with Comic Relief. You just have to relax and stop thinking you're on camera, and just be, and let them capture it.

If you had to sum up, what would be the key take-away from the experience?

There's stories everywhere, fascinating stories, and you just have to do your best to uncover them. I always say to kids when I go into schools, when they ask me about Gangsta Granny or Grandpa's Great Escape, to ask their grandparents questions, because I bet they had exciting lives before the kids were born.

If you don't ask, you never find out these stories, and then they become lost. I think it really reinforced that. We're so used to living in the moment, and just being obsessed with what's right in front of us at that moment - on our phones or television screens. Every family has interesting stories, and you just need some patience and time to find them out - and you learn a lot.

Making it human history always makes it more interesting. Something like WW1, you often hear lots of facts and figures about how many people died in this battle or that battle. I remember learning at school about it, and it was this battle this many people died, and this happened, and it feels very abstract to you. When you boil it down to one person's life, to a human story, the history becomes very real.

I'm glad there weren't any 'baddies' in my family, because I remember Jack Whitehall found out his ancestors were all horrible. Fortunately, I didn't have a story like that so I was relieved!