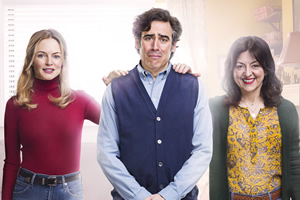 David Cross introduces his new sitcom about a bigamist, and we hear from stars Stephen Mangan, Heather Graham and Jo Hartley.

Let's face it, there was probably nothing funnier in 2018 than Plaid Shirt Guy's subtle critique of the US president over the Orange Man's very shoulder at a rally. But our comedy editor picks five acts who made a pretty good stab at lifting the gong for top live gig of the year.

David Cross is not one to shy away from ugliness. Whether it's hairplug-rejecting Tobias Fünke on Arrested Development or voicing Lakeith Stanfield's white voice in Sorry to Bother You, Cross is not afraid of discomfort. So it makes sense that he's a fan of the British bleak cringe comedy of the early aughts. Awkward, provocative, and downright gnarly comedy ruled England from the late '80s on. Shows like Knowing Me, Knowing You, The Office, and Snuff Box stretched the limits of unlikable protagonists. But Julia Davis out-yikes'ed them all with Nighty Night. The first episode sets the tone for the rest of the show. In a doctor's office, Davis's character Jill sobs, "I mean why, why me?" Her husband Terry consoles her, reminding Jill that he's the one with cancer.

A stand-up star delivers a masterclass in form allied to barnstorming content.

Sky One's new comedy Bliss had very little redeeming features and outstayed its welcome within the first fifteen minutes of its forty-five-minute running time. Written and created by Arrested Development's David Cross, Bliss focuses on travel writer Andrew (Stephen Mangan) who uses his job to cover-up the fact he's leading a double life. On one end of Bristol, Andrew is married to pretty American Kim (Heather Graham) who he shares a teenage daughter Christina (Hannah Milward). Whilst, in a separate part of the sister, he lives with long-time partner Denise (Jo Hartley) and their son Kris (Spike White); who is a little tired of his dad turning up with plane models from his faux work trips. Despite Andrew deceiving four of the people he supposedly cares most for, the character I felt sorriest for in Bliss was his boss as he was re-purposing Trip Advisor reviews of the destinations he was supposedly visiting whilst he was with his respective households. There was a myriad of problems with Bliss, which is one of the worst comedies I've seen in quite a while, starting with the fact that the show's lead character is duping two women as well as deceiving his two children. Despite being played by the charming Stephen Mangan, Andrew is essentially a sociopath who is living so many lies that he's struggling to keep up with various deceptions. Cross depicts Andrew as someone whose close to breaking down as we see him crying as he leaves Kim's house for Denise's at the start of the episode. In fact, Bliss' other main crime is that it's not funny in the least and almost functions more as a drama about a man whose double life is starting to affect his sanity. The key storyline in this first episode sees Andrew try to prevent both women from being at the same Italian restaurant at the same time, however his methods are incredibly questionable. From slinging racial insults at he and Denise's dinner guests to slating the vegan friends of Kim, Andrew is a character who has very few redeeming features. Meanwhile, both Denise and Kim are presented as women who struggle to think for themselves and go along with what Andrew tells them to do. Kim is especially under-utilised in this first episode as Andrew spends most of his time with Denise whilst his wife struggles to cope with the Eastern European builders that are working on their new kitchen. Despite being a fan of David Cross, I have no interest in watching any more of Bliss; a comedy that isn't funny and one that I'm shocked was commissioned in the first place.

Bliss, a comedy about bigamy that wants it both ways

Stephen Mangan's character used to be indecisive but now he's not so sure.

It's already time to divorce from Bliss - review

If David Cross had removed all the jokes from his new Sky One series Bliss, it would have made a very fine, uneasy drama about bigamy and the lies we tell ourselves. Unfortunately, he didn't. And as a comedy, it fails pretty spectacularly.

It's the perfect premise for farce, so it's a surprise that bigamy hasn't really been the subject of a TV comedy before.

A new dramedy from David Cross, starring Stephen Mangan as travel writer Andrew, who divides his time between two families. This opener charts an excruciating dinner engagement, where Andrew worries about being discovered. Your enjoyment may rest on how much you sympathise with Andrew's anguish at his own situation.