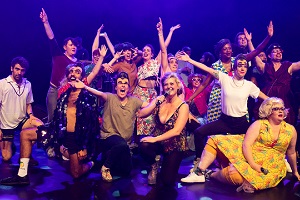 Lost Voice Guy, Rose Matafeo, Phil Wang and Max & Ivan will be amongst those taking part in the 2019 Amusical special at the Edinburgh Fringe.

Exclusive: I talk to Animusical

"This is what the future looks like, it's queer, it's fat, it's working class and it's not just white!"

Comedians to perform songs from musicals on Comedy Central

Dave Cribb was inspired to create the board while watching The Chase and mishearing a question about Monopoly as "Sara Pascoe".

A pilot episode of live comedy format Amusical is to be filmed by Comedy Central. Hosted by Jayde Adams and Kiri Pritchard-McLean, the show sees comedians singing their favourite songs from stage and screen.

Amusical: not giving away their shot

Comedians Kiri Pritchard-McLean and Jayde Adams team up with musician Dave Cribb to bring you the surprisingly tuneful side of your favourite standups.

Comedians to sing songs from the musicals in new comedy night

A new comedy night is launching, in which comedians sing songs from the musicals. Amusical starts in London this March with guests including Chris Addison and Felicity Montagu.

Foiled, a comedy play set in a hairdressing salon, is to become a sitcom series on BBC Radio Wales.