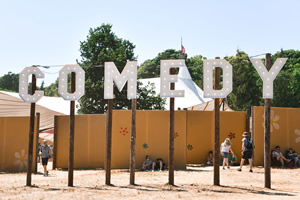 Latitude is the ultimate outdoor arts festival (with lots of decent music too) - this year with added dust and band-dissing. Big names wandering about onstage and off, new comic discoveries, Dr Buckles DJing, pink sheep and green ants - it was quite a weekend.

Director Danny Boyle and actor Himesh Patel have both defended a controversial scene in their film Yesterday following an online backlash. (*Warning: contains spoilers for Yesterday*)

Yesterday is in cinemas now, so Den Of Geek sat down with Danny Boyle to find out what makes him laugh...

Revolving around a failed musician (Himesh Patel) who awakens from a coma and realises he's the only person who knows who the Beatles are, the Danny Boyle directed, Richard Curtis scripted Yesterday squanders a promising premise by using it in service of a reactionary romcom about a bumbling guy learning to appreciate the beautiful best friend (Lily James) who's spent her entire adult life quietly pining for him. The Beatles back-catalogue gets an extensive airing, and Patel's good at performing the songs. But a few Boyle-inflected flourishes aside that hint and something deeper, this is pretty banal stuff. Ed Sheeran has an extended cameo as himself; his best joke involves "improving" the lyrics to a certain classic - a gag that was done better by Nicholas Cage in Peggy Sue Got Married, which says it all, really.

The latest jukebox movie to put its women on mute

Danny Boyle's schmaltz-fest is all about musicians, and all of them are men. It's another hero's journey in which women are there to dote, scold and sell out.

Danny Boyle's Yesterday is a romantic comedy with a rubber soul.

The absence of The Beatles is the premise of this mixed movie.

Oscar-winning director discusses his latest film, in which the world forgets about the Beatles.

Danny Boyle didn't want to cast Ed Sheeran in Yesterday at first, as he admits he initially wanted Coldplay's Chris Martin for the role.