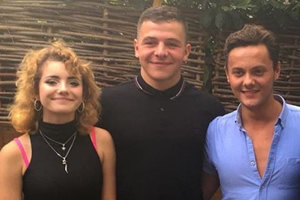 Look how Outnumbered's Ben, Jake and Karen have grown up!

Outnumbered fans have been treated to a trip down memory lane as the young cast recreated the show's iconic board game scene.

Daniel Roche: Dennis and Skinner have dated for years

Hugh Dennis and Claire Skinner sent loyal Outnumbered fans wild after they finally lifted the lid on their relationship just days ago. And their on-screen son Daniel Roche has shared even more insight into the pair's romance, as he has revealed the couple have been dating for 'years'.

Christmas is the season for catching up with old friends and so Boxing Day night seems an ideal time to entertain the Brockman family.

The Outnumbered kids on returning to TV

The BBC has confirmed that hit sitcom Outnumbered is to return for a new Christmas special.

What happened to those boyish curls?

So after seven years and five series we must say farewell to Outnumbered (BBC One), which has at last been outmanoeuvred by Mother Nature and the pulsating endocrine systems of its now only semi-juvenile leads. Jake (Tyger Drew-Honey), Ben (Daniel Roche) and Karen (Ramona Marquez) were 11, eight and six respectively when the sitcom about life in the overscheduled, underdisciplined Brockman household began in 2007. Now Karen looks like a 25-year-old model, Jake is a tangle of gangling limbs and Ben - well, Ben still looks like Ben, but galumphs stolidly now rather than pinballs round the house, more usually mortified these days than gratified by the havoc he creates.

In the beginning, most of the art and all of the craft went into assembling the children's semi-improvised performances into workable narrative wholes. As the exhausted parents, Claire Skinner and Hugh Dennis gave lovely, understated and endlessly, beautifully generous performances that left the children room to perform while gently trammelling them in the right direction. It was all very ... parental, really, and doubtless almost as exhausting as the real thing.

But now the kids have minds, scripts and marks of their own. They manage them all very well. To say that the magic is gone is not to do them a disservice but simply to recognise that Outnumbered was a series built round the unfakeable pre-adolescent world-weariness of the 11-year-old oldest child, the irreproducible childish ebullience of Ben and - words almost fail me. What was it about Karen? The sense of nascent megalomania within? The slow, styptic blink when she spotted an inconsistency in an adult's story or an incompatibility with her world view? The moral sense of a snake coupled with the unforgiving judgment of a Puritan preacher? The sociopathic detachment with which she scanned for personal weakness and the elegance with which she struck? ("So you've been a bridesmaid? But never a bride.") The composure remains, but she has grown into it now. The preternatural element of her gifts-slash-unnameable threat has lessened. The family and viewer are less tense. It's a relief, but the laughs are fewer and our time together is over. It was great while it lasted though.

For a show based on sarcastic back-chat, this last-ever episode turns the tables with a Disney-style finale. Karen's even offering tea and biscuits when dodgy Auntie Angela (Samantha Bond) turns up with her latest toy boy. But how will Spartacus: The Musical go for Ben? And what about the search for Tommy the hamster? Claire Skinner, Hugh Dennis and the kids - Tyger Drew-Honey, Daniel Roche, Ramona Marquez - make a surprisingly sentimental exit.