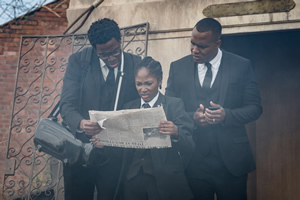 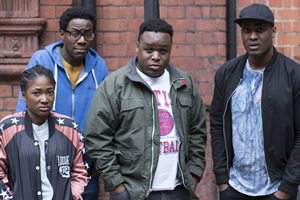 As a black writer in a white industry, we need support

Working in the world of TV, a small core of black writers, including myself, often find ourselves dismissed and undermined. It is time for change says Daniel Lawrence Taylor.

Timewasters, ITV2's sitcom about four young black jazz musicians who find themselves transported through time, will not be returning for a third series.

Review: Why ITV2's Timewasters is worth your time.

With the ability to transport its characters to any time in the past or future, Timewasters has endless possibilities, and its black central cast allows for a new, interesting spin on the time travel genre.

"We're going through a black renaissance"

I talk to Daniel Lawrence Taylor

In 2018 Timewasters was BAFTA nominated and Daniel Lawrence Taylor who wrote and starred in the series was awarded the RTS Breakthrough Award, so it's no surprise that the time-travelling comedy is back for another run on ITV2.

The show follows a four-piece South London jazz band who travel back in time. In Series 2 of ITV2's sitcom Timewasters, we see them transported to 1950's London. The band quickly decide to start a jazz club to rival others.

Timewasters creator confirms US version is in the works

Daniel Lawrence Taylor will oversee the US remake which will be produced by Grammy Award-winning artist LL Cool J.

Timewasters returns to the 1950s

ITV2's hit comedy Timewasters is to return to screens in 2019 with the black London jazz quartet transported to the 1950s.