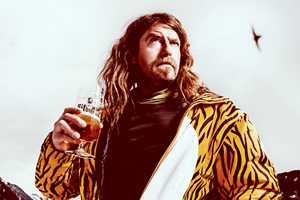 Hairy Canadian Craig Campbell looks back at genitalia-themed contest winners, complimentary abuse and one comedy legend who was a 'monumental dick-a-saurus'.

Stand-up Craig Campbell has got early onset osteoarthritis. He has a bit of a rant about it in this entertaining blog post.

Stand-up comic Craig Campbell is trying out something a bit different... he's putting his latest show on the iTunes Store and not bothering with a DVD release. Find out more and see a preview clip here.

Not quite everyone was glued to the football last night. Though some audience members clearly managed to divide their attention between the comedy gig launching the Great Yorkshire Fringe and events at the Otkritie Arena, given how quickly news of Colombia's late equaliser spread around the room.

Campbell offers a fine balance of the inane and smart and can seemingly adapt to any scenario presented to him.

Aberdeen Comedy Festival getting under way

The second Aberdeen Comedy Festival is getting under way.

The majestic mountain moose in a tiger striped onesie brings his thrilling new show Easy Tiger out of the Fringe jungle and onto the world stage for his third solo tour.

Will Franken reveals the winners of the first-ever Defining the Norm Awards.

Craig returns to Edinburgh with a new show, Easy Tiger He explains that he's not too precious about his jokes, but prefers to think on his feat - mixing things up a bit, ensuring each show is an event.

Canadian-born comic Craig Campbell is somewhat of a force to be reckoned with, having teamed up with the likes of Tony Law and Dan Antopolski to produce Edinburgh shows in the past. Campbell has also dabbled in theatre, performing a one-man play at Edinburgh in 2008, and returns to the festival this year with a new stand up hour, Easy Tiger, which looks set to be as absurd and innovative as previous shows.