Catherine Cohen, Jordan Brookes and Jessica Brough have won the prizes at this year's Edinburgh Comedy Awards, sponsored by Dave. 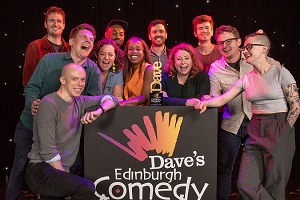 The nominees for the Edinburgh Comedy Awards 2019 have been revealed.

This week marks a year on from when Covid hit comedy. There had been talk of the virus meaning that gigs might not happen but suddenly it became a reality. On March 11, 2020, I went to see Dave's Edinburgh Comedy Award Best Newcomer 2019, New York-based Catherine Cohen, at Bush Hall in West London - the first night of a sell-out run - and filed a review for the Evening Standard which you can read here. The review starts by saying that Cohen leaves you wanting more. She certainly did. The next day I received an email saying that the run had been postponed. Due to the possibilty of flights to America stopping Cohen had taken the difficult decision to return to New York. A week later it was shutdown UK.

Opinion: the comedy week I will never forget

2020 might be a year we want to forget, but there is one week that I will never forget. Maybe it was a premonition and like a squirrel storing up nuts I wanted to get some comedy in the bank, but the week before Covid-19 really hit the UK I saw many more live shows than I usually see in a week in London.

In light of upcoming travel restrictions between the US and Europe caused by COVID-19, Catherine's remaining dates in London will be rescheduled until later in the year.

Catherine Cohen's official line of work is, in her own words, being "a beautiful comedian slash dumb slut without a primary care doctor".

"I did 28 shows at Edinburgh Fringe and almost lost my mind".

As is tradition, here's my look back at the ten most memorable comedy gigs of the last 12 months. There are bound to be omissions - the 300 or so shows I see each year are but a scratch on the volume of work the UK's industrious comedy scene produce - and the emphasis is on the 'memorable' not necessarily the funniest or the most game-changing, even if these qualities are so often interlinked.