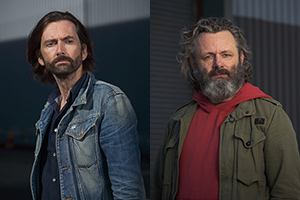 The cast of lockdown hit Staged talk about returning to the format for eight more episodes.

A book featuring the scripts of Staged, the comedy series starring David Tennant and Michael Sheen, is set to be published.

Staged and After Life win I Talk Telly Awards

Staged starring David Tennant and Michael Sheen, and Ricky Gervais comedy After Life, both won two awards each in the I Talk Telly Awards 2020.

David Tennant and Michael Sheen are filming a second series of Staged, their critically acclaimed BBC One sitcom which sees them interacting via Zoom calls.

Staged (BBC One) is the latest lockdown drama - lockdown dramas being an entire new genre, which Wikipedia will define as "a needs-must 2020 phenomenon in which, under the strictures of coronavirus, a rich person is seen questioning their values, a poor person is seen struggling yet being gamely cheeky, and core workers are celebrated. The genre must feature a Zoom-glitch or similar technological embarrassment." And yet Staged was a hugely refreshing addition to the genre, featuring simply a couple of immensely personable actors playing heightened versions of themselves. David Tennant and Michael Sheen, aided hugely by wives Georgia Tennant and Anna Lundberg, are lockdown-rehearsing an unpalatable, 100-year-old absurdist Italian drama, urged and egged on by Simon Evans, who wrote and directed Staged, and gave himself, in fairness, the very worst lines, the lines which those aged eight to 80 will lift eyebrows to and wonder "Did he really say that? What a dick."

It is grand fun, even if slight, although I suspect that the good friends Sheen and Tennant are, no matter how inadvertently, auditioning even in lockdown for the next series of The Trip.

David Tennant and Michael Sheen are being eclipsed in their new comedy... by their glamorous partners.