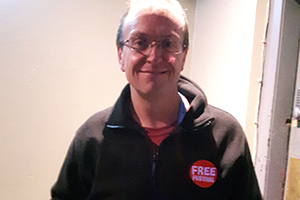 "Hopefully it will bring back that festival buzz to city"

Alex Petty, who runs The Laughing Horse's Free Edinburgh Festival, said that the organization wanted to find a way of supporting performers during the pandemic by providing a way for them to make some money through donations, as well as giving them a platform for creative output.

Laughing Horse Comedy has launched its programme of shows today for its 2020 Edinburgh Fringe line-up that has been taken online. The spirit of the Fringe will continue online this year, with a month of comedy shows, plus children's shows, cabaret and spoken word.

Fringe could become a 'playground for the privileged'

Grass-roots promoters are demanding an overhaul of the Fringe to end the "exploitation" of venue workers and ensure it is properly regulated for the first time.

Why the Counting House is now free from ballooning fees

There are two types of venues in Edinburgh. There are the traditional 'pay' venues. That means audiences pay in advance to see the shows and the performers pay large amounts to rent the rooms and facilities. But there are now four organisations hosting 'free' shows. That means entry is free (though you are expected to donate money on the way out) and the performers pay nothing to perform in the venue.